The state of inflation No big economic news today and, as usual, very limited COVID announcements over the weekend, so let’s catch up on the state of inflation in the economy.

Three of the biggest components of inflation are gas, housing, and vehicles. Let’s look at each in that order.

According to GasBuddy, US average prices to date are $3.86/gallon:

As the graph above shows, this means that almost 80% of the prices for the war in Ukraine are deflated.

Although we’re only 2/3 of the way through the month, here’s what the monthly inflation correlation looks like so far:

In the graph above, I divided the change in the price of gas by 16, roughly on an equivalent scale to general inflation. Since that’s about a +.15% basis deviation from core inflation, I subtracted that for better correlation. On this basis, real inflation in August seems unlikely. Another month of flat prices, if not outright deflation for the month seems likely.

Turning to housing, here’s the chart I released a few weeks ago of the latest FHFA and Case Shiller home price indexes through May, relative to owner-equivalent rent, how the Census Bureau measures housing in the CPI:

As OER lags real home prices, whose increases have so far not slowed significantly in these indexes, we can expect monthly OER increases in line with +.5% or +.6% of the past few months, if not even slightly higher as shown in the graph below:

Finally, let’s turn to vehicles. Used car prices began to rise sharply in the spring of 2021 and are now 50% higher than they were just before the pandemic. The good news is that seasonally adjusted prices (black in the chart below) are no higher than they were 8 months ago, last December:

New car prices (red) started to rise sharply a few months after used car prices and are now 18% higher than just before the pandemic. Moreover, over the past year they have increased by at least 0.6% every month except last winter.

As you might expect, new vehicle sales (blue, top right scale) have fallen sharply (about 25%) in response to large price increases.

Via Wolf Street, according to Cox Automotive, vehicles in stock and in transit to dealers are still 70% below where they were just before the pandemic: 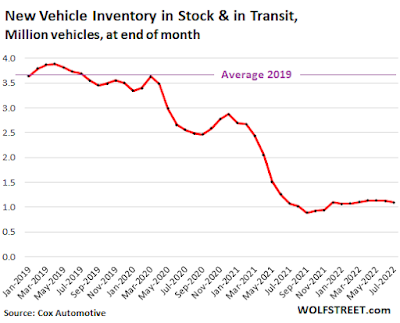 In short, there is no sign of abating in both housing and new vehicle inflation. The decline in gas prices should lead to another good consumer price reading for August, but the future course of oil prices, as shown below, will determine the trajectory of any further decline in gas prices: