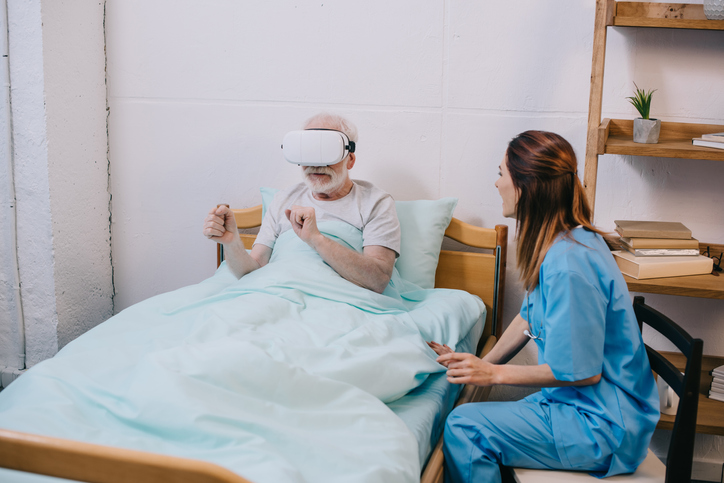 CDC data shows that more than 20% of Americans have chronic pain, with 36% of them having high-impact chronic pain.

The discomfort of this pain is likely exacerbated by the rising prevalence of mental illness across the country, which is becoming an increasing burden on Americans’ well-being. In fact, the percentage of US adults who received mental health treatment rose from 19.2% in 2019 to 21.6% in 2021, according to CDC research released earlier this month.

The story of VR in healthcare started in 1996 at the University of Washington Harborview Burn Center, where Hunter Hoffman and David Patterson developed a new technique to use immersive VR for pain management. They sought to help burn victims through debridement, an incredibly painful process in which damaged tissue and foreign objects are removed from burn wounds. Typically, patients are given opioids to help manage their pain during these procedures, but Hoffman and Patterson acknowledge that opioids are only mildly effective and often have terrible side effects.

When the human body experiences pain, the signal starts from the site of injury and fires brain receptors. Hoffman and Peterson’s research suggests that if the neural pathway is flooded with alternative signals, you can make patients feel less pain. They measure their tests with both subjective patient-reported outcomes and MRI data, establishing that VR was more effective in pain management during debridement than opioids.

“They showed that VR can outperform opioids – proving the power of a pixel over a molecule,” said Matthew Staudt, co-founder and CEO of AppliedVR. “This launched hundreds of studies, all confirming the same insight.”

AppliedVR, founded in 2015 and based in Van Nuys, California, develops VR solutions designed for low-friction healthcare adoption. To Staudt, the reason Hoffman and Peterson’s findings haven’t revolutionized pain management is that technology has long been a limiting factor when it comes to hospital adoption of VR. At the time of their research, VR technology “cost $50,000, weighed 50 pounds, and was connected to 50 machines, so like a lot of innovation in this world, it was wasted in the lab,” he said.

Staudt believes the healthcare industry is “sitting on a whole new class of medicine” that could greatly improve providers’ approach to pain management once VR headsets and other wearable VR devices are developed and deployed at scale. However, patients are sometimes wary of adopting new technologies or moving away from long-standing methods of care they’ve been forced to trust, he pointed out. His company focuses on bringing what can potentially seem like a complex and confusing device into patients’ homes in a way that is easy to use, engaging and efficient.

The first condition AppliedVR is looking to address is chronic lower back pain. The company partnered with Beth Darnall, a pain psychologist and director of Stanford’s Pain Relief Innovation Lab, to co-develop its eight-week chronic low back pain management program. This physician-prescribed, self-administered solution allows patients to manage their chronic low back pain without opioids from the comfort of their own home. AppliedVR’s system for chronic low back pain received designation of the drilling device and de novo approval by the Food and Drug Administration.

AppliedVR is testing its VR devices in healthcare systems such as Mayo Clinic, Cleveland Clinic, UPMC, Geisinger and Cedars-Sinai.

Cedars-Sinai stands out as a health system particularly supportive of VR adoption. The health system has used VR in its hospitals for nearly a decade and has treated about 3,500 patients with the technology, according to Dr. Brennan Spiegel, a Cedars-Sinai physician and VR medical researcher. And he thinks more health systems should do the same.

“We treat the human body as a machine when people come to the hospital, and in Western medicine in general, and that works pretty well — up to a point,” he said. “But we know that mind and body are connected. This is not voodoo science. The fact that the brain and body communicate is actually well-established neuroscience.

Dr. Spiegel argues that if you can get the brain in a comfortable position, that relaxation will have a trickle-down effect on the rest of the body. This can help reduce heart rate, blood pressure and stress hormone levels, he claims. Not only does this help patients have a more positive experience during their hospital stay, but it can also lead to clinical benefits such as lower pain scores and less need for pain medication.

“Pain medications can reduce the physical experience of pain, but they do nothing to manage the emotional experience of being in the hospital or the anxiety that comes along with it,” Dr. Spiegel said. “Hospitals are very unnatural environments that no one — literally no body — is designed to be in.”

At Cedars-Sinai, the use of VR aims to reduce both pain and anxiety. When I spoke with Dr. Spiegel, he was in the surgical intensive care unit at Cedars-Sinai, where VR is used every day. Clinicians wheel around a four-wheel mobile cart that carries VR equipment that can be easily transported and set up from room to room. The cart headset manufactured by HP, which can measure patient biometrics such as heart rate, heart rate variability and pupillometry. These metrics help clinicians assess the physiological impact of VR on the patient’s body.

The health system has created its own VR software, called Nature VR, which allows patients to enter various natural environments so that they can reduce anxiety and/or pain through meditation, breathing exercises or relaxation of their own volition.

Patients are usually treated with a VR headset for about 15 minutes. Their baseline pain and anxiety scores are measured both before and after treatment so clinicians can see if the patient has had a positive response. Most of the time they do. When this is the case, the headset will remain at the patient’s bedside for them to use for the rest of their hospital stay.

In addition to this inpatient program, Cedars-Sinai also had outpatient VR programs where patients wear headsets at home to manage things like pain, anxiety or irritable bowel syndrome.

Dr. Spiegel had treated a patient with a VR headset minutes before our call. He said the patient was grateful for the treatment, noting that it allowed him to get out of the less comfortable environment he was in and into a calm, peaceful space.

Having the ability to momentarily escape the hospital environment can do much to enhance the inpatient experience. Solomon Rogers, the director of global innovation at Magnopus, is another strong supporter of this thesis.

Rogers’ company is a technology studio based in Los Angeles and London that has created VR projects for numerous films and TV shows. It is now exploring applications in the healthcare field. One of Magnopus’ largest healthcare partners, Children’s Hospital Los Angelespiloted its VR technology in 2019 to help pediatric patients escape reality for a while.

“There was a patient who was bedridden who couldn’t move from his back,” he said. “We enabled virtual reality technology to bring an experience where this patient can become an astronaut. Without the need to sit and move, they were able to climb around the space station and free themselves from the confines of the bed while still being able to look down at Earth.

Not only does the momentary release of pediatric hospital patients from their reality improve their mental well-being, but it has also been shown to marginally improve the speed of their rehabilitation, according to Rogers.

Magnopus has also implemented VR technology to ease the anxiety of parents of pediatric patients. Through a partnership with Great Ormond Street Children’s Hospital in London, Magnopus has developed technology to reduce anxiety for families ahead of a child’s hospital stay through the use of 360-degree VR hospital tours. Immersing the patient and their family in the world of the hospital before they ever enter the building helps them enter their stay with fewer unknowns and therefore more comfort, according to Rogers.

“It’s well known that hospitals use VR for surgical training, but there are so many other ways it can be applied in healthcare,” he said.