Focusing on the short end of the yield curve When most analysts talk about yield curve inversions, they are usually referring to a measure of the 10-year bond versus a shorter maturity such as 3 months or 2 years. They certainly have merit – in fact, the 10-year minus 2-year inversion has typically had the longest pre-recession time.

But the Federal Reserve of New York writes that special attention should be paid to the short end of the yield curve, ie. 2 years and under. This is the part of the yield curve that is most responsive to the Fed and what the trajectory of the economy is likely to be over the next year or two. Generally, once the short end turns (ie Fed funds and 3-month maturities) against 1- and 2-year maturities, the bond market is judged to be in recession within that time frame, as it is expected that the Fed will have to cut rates in this time period. 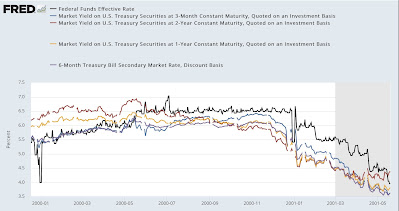 In the first half of 2000, one- and two-year yields were higher than many short-term yields, but were tightening. By the second half of 2000, yields were completely flat in the range, then completely reversed. By early 2001, when the Federal Reserve, like everyone else, sensed that a recession was imminent, Federal Reserve rates fell, and only as the recession itself progressed did rates begin to normalize. 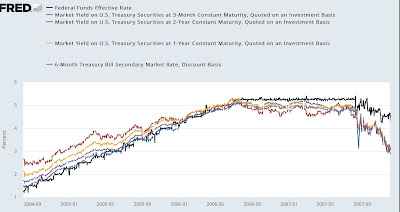 Note a similar progression as yield ranges narrowed but remained positively skewed in 2004-05, but then leveled off in the spring of 2006 before fully reversing later in the year. In 2007, when the Fed and the market smelled an impending recession, the Fed cut rates, but the inversion continued.

Now is the present (note that this week’s rate hike to 3.12% is not yet shown in the Fed funds line): 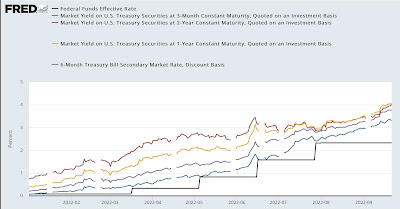 Only the 1 vs. 2 year range is reversed. Although all rates are rising, the shortest term remains positively skewed.