August 3 coronavirus scoreboard: Is this what endemicity looks like? 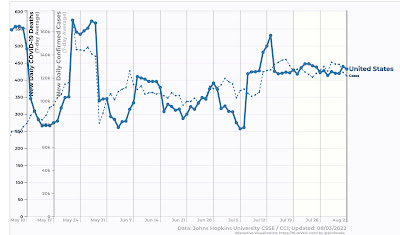 Hospitalizations have held up over the past 10 days, reported in the 45-47,000 range, and were at 46,100 as of July 30. A commenter on Seeking Alpha who works in a hospital wrote to me that the big increase over the past few months has been people showing up with unrelated issues with a positive COVID test, ie. “patients with COVID:” 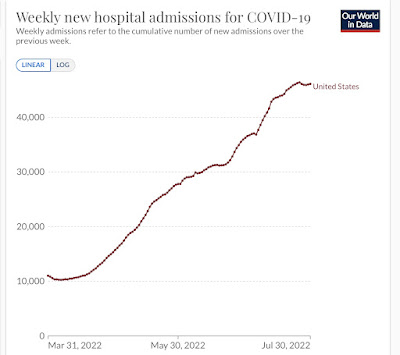 Biobot has not been updated since a week ago, showing at this time a 10% drop in the COVID virus in the wastewater, consistent with the “real” number of cases of about 360,000.
The CDC updated its tracer yesterday showing that BA.4&5 accounted for 97% of all cases. They also included a new subvariant, BA.4.6, in their analysis, showing that it accounted for 4% of all cases or 1/3 of the total number of BA.4: 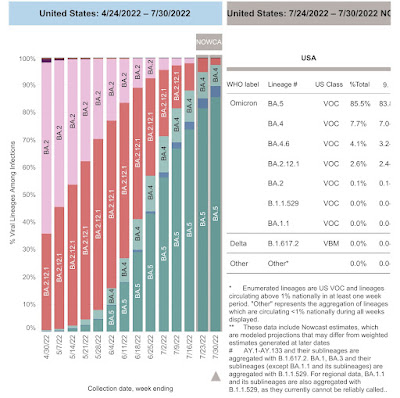 It is primarily a factor in the northern Great Plains, where it accounts for 9% of all cases. 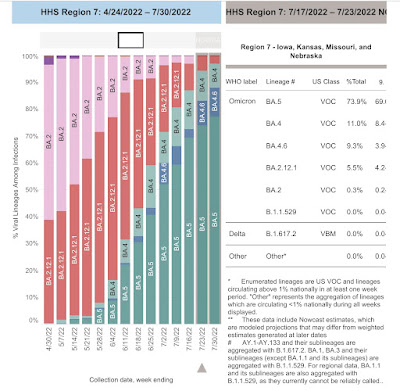 But it hasn’t grown much in the last month, nor does it seem to be replacing BA.5. Likewise, while a few cases of BA.2.75 show up in most states, they don’t show up at all in the CDC data. I haven’t seen any medical comments on either sub-variant this past week.
Regionally, there was a small drop in confirmed cases in the West, while the other three regions were stable: In fact, the only notable changes in any state are New York and New Jersey showing small declines: 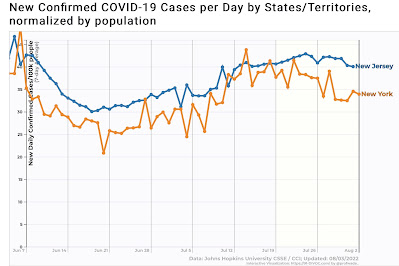 Unless a new variant emerges soon, I suspect we are entering a period of declining cases and deaths.