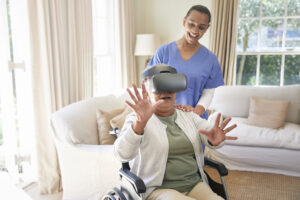 Digital health consolidation continues as startups realize that scale matters, especially if you’re selling to cash-strapped providers, as is the case with BehaVR and OxfordVR.

The two virtual reality mental and behavioral health companies announced merger on Tuesday, without disclosing financial terms of the deal. The hope is that a single platform will leverage the strengths of both companies and offer care for the full spectrum of mental health needs. The merger is backed by $13 million in Series B funding.

Based in Nashville, Tennessee BehaVR offers care for anxiety, mental health, pain management and maternal health. Based in Oxford, England OxfordVR is primarily focused on serious mental illnesses, such as post-traumatic stress disorder, bipolar disorder, and schizophrenia. Through the merger, OxfordVR’s products will join BehaVR’s platform, providing services across a range of mental health conditions.

“We have a lot of complementary products, from lower acuity products to serious mental illness,” Aaron Ghani, founder and CEO of BehaVR, said in an interview. “It made a lot of sense to bring these two together.”

“It makes both companies stronger … Now we have a broader product base, which means we can treat a larger percentage of the population that exists,” Gopalakrishna said in an interview.

Ghani will be CEO of the combined company, and Dr. Daniel Freeman, Scientific Founder and Chief Scientific Officer of OxfordVR, will join the leadership team. Gopalakrishna will continue to be involved with the company, but has not yet finalized his role. That could include serving as an adviser or consultant to the company, he said.

The $13 million Series B funding round was led by Optum Ventures and Oxford Science Enterprises, and included participation from Confluent health, Accenture Ventures, Chrysalis Ventures and Thornton Capital. In total, the companies have raised over $40 million.

Because of the current economic environment, it was not easy to secure the financing, Ghani said.

“It took a lot of work, but we were committed to it and I’m pleased to say we did it,” he said.

The combined company plans to use the funding to continue to pursue its pipeline of products that are candidates for FDA approval. The product at the forefront of the process is OxfordVR’s gameChange, a prescription-only virtual reality cognitive therapy treatment. Wins FDA Breakthrough Device designation in June and is designed for adults with schizophrenia spectrum disorders and aims to reduce anxious avoidance and paranoia. A clinical trial of gameChange found that severe patients had a 49% reduction in anxiety avoidance, a 41% reduction in paranoia, and a 21% increase in quality of life.

Both companies sell primarily to providers, but there is no digital therapy reimbursement yet. However, there is a bill introduced to the Senate, which would require the Centers for Medicare and Medicaid Services to provide guidance on coverage of prescription digital therapeutics for Medicaid and the Children’s Health Insurance Program.

Other virtual reality companies in the mental health field include Better in practice and Virtual care for Amelia.