October existing home sales will be out later this morning, which will be of interest to me primarily as to what happened to prices and secondly if the low inventory problem that has been around for 3 years is moving toward resolution.

Meanwhile, Jason Furman got some traction and amplification from Paul Krugman yesterday on the chart below, which measures core inflation using new rent indexes (eg Zillow) rather than owner-equivalent rent: 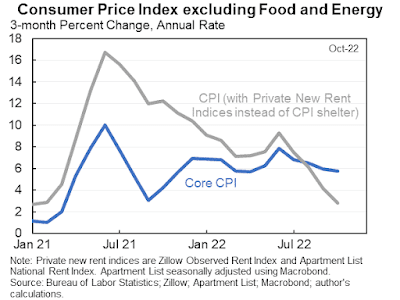 The implication is – one embraced by Krugman – that inflation is no longer a problem.

I don’t think that’s really the case because we still use imputation of hypothetical rents to measure house prices.

I’ve already posted a graphic of what the former shelter would look like with basic inflation:

But let’s go a step further and measure what core inflation looks like, *including* shelter, using actual home prices as measured by the FHFA index instead of owner-equivalent rent, thereby eliminating the entire problem. Here it is: