End of 2022 coronavirus scoreboard: becoming endemic and still an important threat to the elderly As we close out 2022, let’s look back at the big picture for COVID.

The best historical measure of actual infections is the Biobot, which samples sewage. This is because the advent of easy home testing a year ago means that far fewer people have had ‘confirmed’ cases this year compared to ‘real’ infections. The solid line in the graph below is the particle level (left scale) from which the actual case levels (right scale) can be derived:

Current levels are now higher than any other wave peak except last winter’s Omicron.

Regionally, the Northeast is faring worst, although its current outbreak is not yet at the level of the first, catastrophic wave. The South is also up sharply, while the West remains in relatively good shape for now:

As you can see, this contrasts with the “confirmed” cases, which, while increasing, are well below all previous waves: 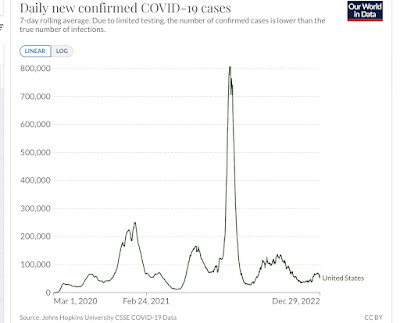 But hospitalizations and deaths are much more reliable because cases have always been confirmed.

Hospitalizations are up 50% from their recent lows, but are well below any previous wave of infections so far: 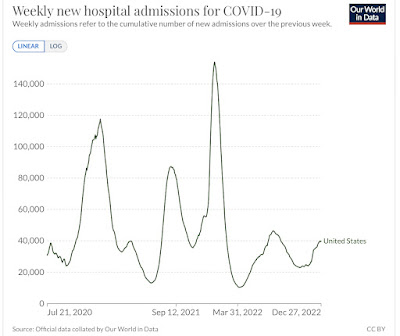 The same goes for deaths, which since March have hovered between 300-500/day, well below their levels at earlier times during the pandemic: 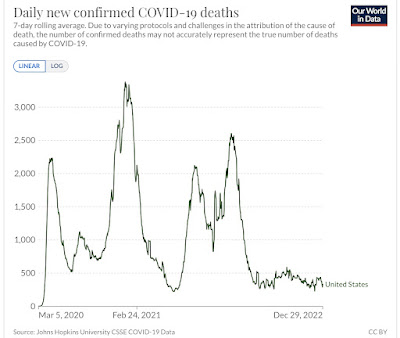 Deaths continue to be concentrated among the unvaccinated or incompletely vaccinated: 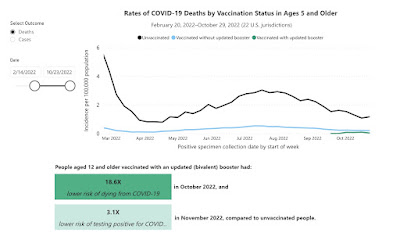 And they also warp much more with age: 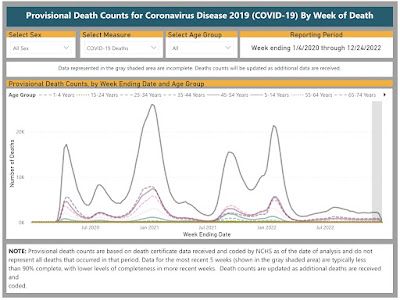 Even fully vaccinated seniors should probably remain vigilant and, in particular, cover up when indoors in public. Overall, incompletely vaccinated people over the age of 50 account for nearly 3/4 of all COVID deaths. 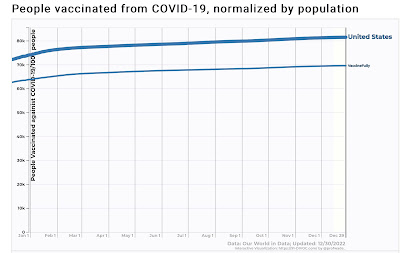 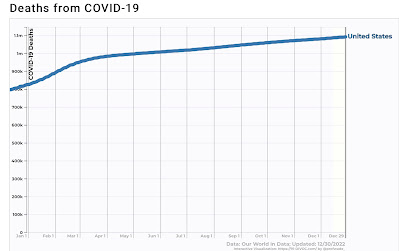 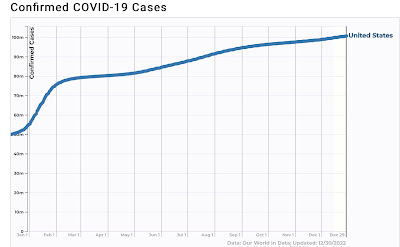 Since *actual* cases were at least double confirmed cases before this year and at least tripled the number of confirmed cases this year after home testing became widely available, probably about 240,000,000 or more Americans (or about 75%+ of the population ) have at one point or another been infected.

Finally, here’s what the alphabet soup spread of the newer variants looks like right now. XBB and its sub-variant XBB.1.5 make up 44% of all cases, BQ.1&1.1 another 45%, with BA.5 falling below 4% and the remaining variants in the soup 7%: 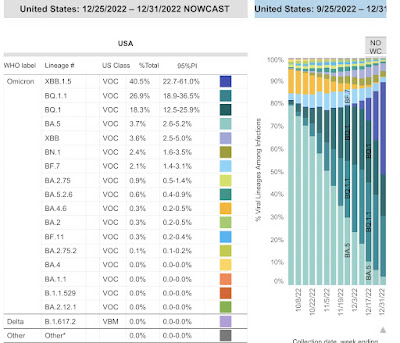 The largest regional outbreaks shown by Biobot correspond to the highest prevalence of the XBB variant: Note that XBB%1.5. It is most prevalent, at 75%, in the Northeast regions, followed by approximately 20% in the Southern regions, and less so in the Midwest and West, which matches almost exactly the Biobot data cited at the beginning of this article.

Between previous infections and vaccinations, probably only 5% or less of the population is completely “naïve” to the Covid virus, with no resistance whatsoever.

This, along with improved medical care, probably explains why Covid has become much less lethal per capita this year. It is about to become endemic.

The bottom line is that we continue to see more easily portable options, with low hospitalizations and even lower deaths. In the last 9 months, deaths have gone from 500,000 per year to 133,000 per year. The lion’s share of deaths concern the undervaccinated and the elderly. If all people over the age of 50 were fully up-to-date on their vaccinations and always wore masks indoors in public (yes, that means *no* indoor restaurant dining), deaths would likely be reduced to about 35,000/year or about 100/day, a true flu-like comparison.