Mass incarceration is the elephant in the room when it comes to addiction, expert says – MedCity News 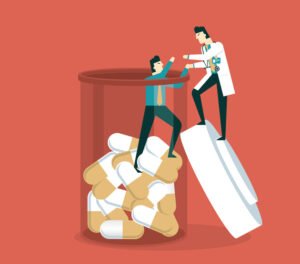 According to National Institute on Drug Abuse. That’s because the United States’ response to addiction and substance use disorders is a criminal justice response, not a public health response — but it doesn’t have to be, one expert said.

“The elephant in the room when we talk about substance use disorders and addiction is mass incarceration, but we don’t address that issue as a state,” said Haner Hernandez, an addiction recovery specialist. He spoke on a panel Sunday at Engage at HLTHpatient engagement summit hosted by MedCity News in Las Vegas.

People in marginalized communities are disproportionately affected in terms of both mass incarceration and access to substance use treatment, he added.

“This system that we’ve built for treatment is primarily focused on and accessible to and designed for white heterosexual men,” Hernandez said. “So if you don’t fit that box and you’re trying to get access, it’s going to be harder for you. If you are [LGBTQ+]if you’re a woman and you have children and you don’t speak the language, if you’re older, if you’re younger, if you’re a person with a disability, if you’re a person of color in this country, you’re going to have more difficulty getting access.

Hernandez has first-hand experience when it comes to the difficulties of getting substance use care. He started using drugs when he was 18 and spent several years in and out of prison. But eventually he got treatment.

“I left prison for treatment not because I wanted to, but because it was an option to get out of prison,” he said.

While in treatment, he was given an opportunity to work as a counselor and outreach worker in Boston, which involved helping people on the street get care. He worked in health and human services for 10 years before deciding to pursue education. Received Bachelor of Science and Human Services from Springfield College; his MA in Addiction Studies and Counseling and Psychology at Cambridge College; and his doctorate in public health from the University of Massachusetts. His past experiences have shaped the way he approaches his work now as an addiction recovery specialist, he said.

“The way my background helps me is that I’ve had two walks in life,” Hernandez said in an interview. “One of having experience with substance use and recovery and the learning that comes from that, from being in prison, from experiencing homelessness, from being on the street. The other is academic experience. I understand research and data, I understand evidence-based models and evaluation… It makes me a little more well-rounded.”

While Hernandez went down the path of treatment for his own recovery, he said there are other paths people can take for substance use, whether it’s medication, abstinence or holistic processes like meditation.

But the healthcare industry doesn’t always recognize these multiple pathways to care, he said. It’s vital for patients to have a “menu” of treatment options, Hernandez stressed.

“Tonight you will eat. Somebody’s going to put a menu in front of you, they’re not going to tell you that you’re eating a hotdog, whether you like it or not,” he said. “Now we want to say that we believe in agency and self-determination and that people have choices. But the reality is that when you look around, we impose solutions on people and then when they don’t work, we punish those very people. We say, “It didn’t work because you didn’t work on it, because you didn’t follow my directions. I believe in choice and I believe in multiple paths because the data, the research and the experience tells us that this is the way to work.”

When it comes to fixing these substance use treatment problems, there are several steps that need to be taken, Hernandez said. The language must be changed first.

Second, clinicians and the health care industry as a whole need to look “inward” to treat people of diverse backgrounds, he said.

“We’re very good at saying, ‘I’m the expert, come to me and I’ll tell you what to do and how to do it.’ It’s not working, it’s not working.”

From her own experience, Hernandez has one piece of advice for clinicians and the families of those struggling with substance use.

“Never give up on people,” he said. “Believe in people more than they believe in themselves. I can sit here and present to you today a Ph.D., I’m board certified and licensed, I run programs in Massachusetts, I teach at the university. I can do this because people believed in me more than I believed in myself… To humanize people, to treat them with dignity and respect, does not cost us money. It just takes believing that people can do what we think they can do.”