﻿A reporter asked me if new home sales might actually be on the decline due to the large increase in cancellation rates, as shown below (via Bill McBride): 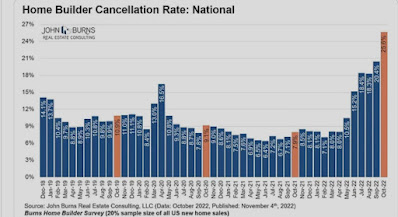 That’s something I’ve known about as well commented a month ago in the context of housing that has been permitted but not commenced.

There are two points to answer.

But let’s apply the data to current new home sales. Here’s the chart for the past two years that I reviewed last Friday:

Below, I show raw new home sales (year-over-year, in thousands) in the first column, followed by the cancellation rate for that month, and finally net sales after adjusting for cancellations:

As stated above, the corrected bottom to date was in July. The ratio in October was in line with that of September and June.

Of course, the streak could certainly go lower in the coming months.

But as I’ve pointed out several times recently, now that the coming recession is almost certain, I’m starting to look for signs in the long leading indicators about how long this recession might be. And new home sales, for all their hype and heavy revisions, are a good place to start looking.