New home sales are very volatile and are being heavily revised. But they are often the first housing indicators to reverse. And the new November home sales report suggests they may indeed have bottomed out. 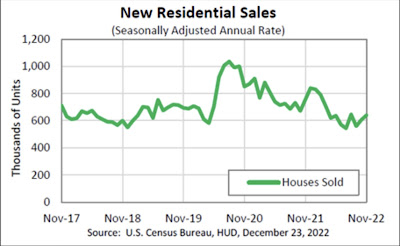 The preliminary figures for November were the highest number since March, apart from August’s 661,000.
Now, a caveat, but also a caveat *about* this attention: we know that the cancellation rate for new home contracts has increased sharply since the spring. So that made *actual* sales worse than reported. BUT, even taking them into account, as of October, the low point was July. I don’t have this month’s numbers for cancellations, so that could change. But also, there’s no reason to think there weren’t similar levels of foreclosures during any of the historic housing downturns driven by rising mortgage rates. In other words, new home sales this year should have a comparable pattern to previous declines.
Finally, year-over-year prices are up 9.5% (this data is not seasonally adjusted) (again, FRED hasn’t been updated, so here’s October’s year-over-year change:

Since this is less than 1/2 of the highest % growth over the past 12 months, my heuristics suggest that home prices, if we can seasonally adjust, have actually started to decline.
As I’ve mentioned several times recently, I’m looking for long leading indicators that might suggest how long (or short) a recession we may be in for. Currently, new home sales suggest that the downturn may not be that long (the Fed is willing, of course).