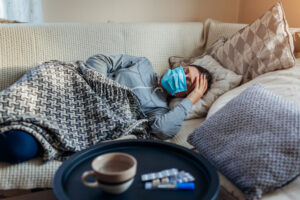 The United States is battling a wave of viruses right now, from RSV to the flu to Covid-19 — and children are bearing the brunt of these illnesses.

But one simple solution could slow the spread: offering paid sick leave to employees, said Molly Weston Williamson, a senior fellow at the Center for American Progress. Williamson recently made these comments in opinion piece published on NBC News.

Nearly a quarter of private sector workers do not have paid sick days, according to National Partnership for Women and Families. Among low-wage workers, more than 60% do not have paid sick leave Institute for Economic Policy found. In addition, about half of working parents are not paid for time off work to care for a sick child, a problem that particularly affects low-income working mothers, according to Kaiser Family Foundation.

Parents who do not have this benefit are almost twice as likely to send a sick child to school or kindergarten than the parents who do.

“When parents don’t have the paid sick leave they need to keep their children at home to care for them and keep them well, they are forced by economic necessity to send sick children to school or day care.” , Williamson said. “When they do, other kids get sick and teachers and educators get sick. And most children and their caregivers go home and spread disease to their spouses, to their loved ones, to their grandparents in a way that really compromises our ability to fight this public health crisis.”

Currently, 14 states and the District of Columbia have laws requiring paid sick leave, as do some cities and counties. But there is no federal law. The onus is on government to bring about change, but also on employers, Williamson said.

“I think we’re in a situation where we need these universal rights that can only come from policy, but there’s also a lot of room for employers to step up and take advantage of the step up by providing these rights now,” she said.

A common misconception about paid sick leave is that it will cost employers, when in fact it will cost employers to provide this benefit save them money down the line, Williamson argued. Workers without paid sick leave are most likely to come to work sick, affecting their productivity and possibly others by spreading illness to coworkers. Employers will also have to deal with increased healthcare costs due to staff illness. They also will have more turnover, as workers without paid sick leave are more likely to quit their jobs than those with the benefit, according to Williamson.

“Essentially, when we don’t guarantee paid sick time, we’re guaranteeing ourselves a situation where people are going to go to work sick,” Williamson said. “They will send the children to school sick. It’s bad for workers, it’s bad for employers, it’s bad for our economy, and it’s bad for public health. This means that nationally we lose billions of dollars in economic costs each year from the cost of reduced productivity due to sick work, from the costs of workplace-borne illnesses, while employers bear higher health care costs and higher turnover costs. “