Syneroid recently raised $500,000 round of funding to bring something between microchips and dog collars to the store. The company finds some interesting pieces on the market, but the deck, as a whole, leaves a little to be desired. We learn more from mistakes than perfection, so I thought it would be great to dive into it for this week’s pitch breakdown!

We’re looking for more unique decks to knock down, so if you’d like to submit your own, here’s how you can do that.

Slides in this deck

During this teardown on the site, you’ll see the company referred to as Syneroid and GPC Smart — the company’s official name is the former, but the brand they use for the platform and its products is the latter. The company told me it raised that $3.9 million valuation round.

The company uses a tight 12-slider deck for its presentation, and no information has been edited or omitted.

Syneroid is entering a market that is very easy to understand: Lost animals are something most of us have experience with in one way or another. This is an advantage as you don’t have to explain the market in detail. It also means the company faces a wall of potential competitors even as it tries to gain traction. It’s a challenge and it’s interesting to see how Syneroid handles it.

Bridge the gap between perceived and actual 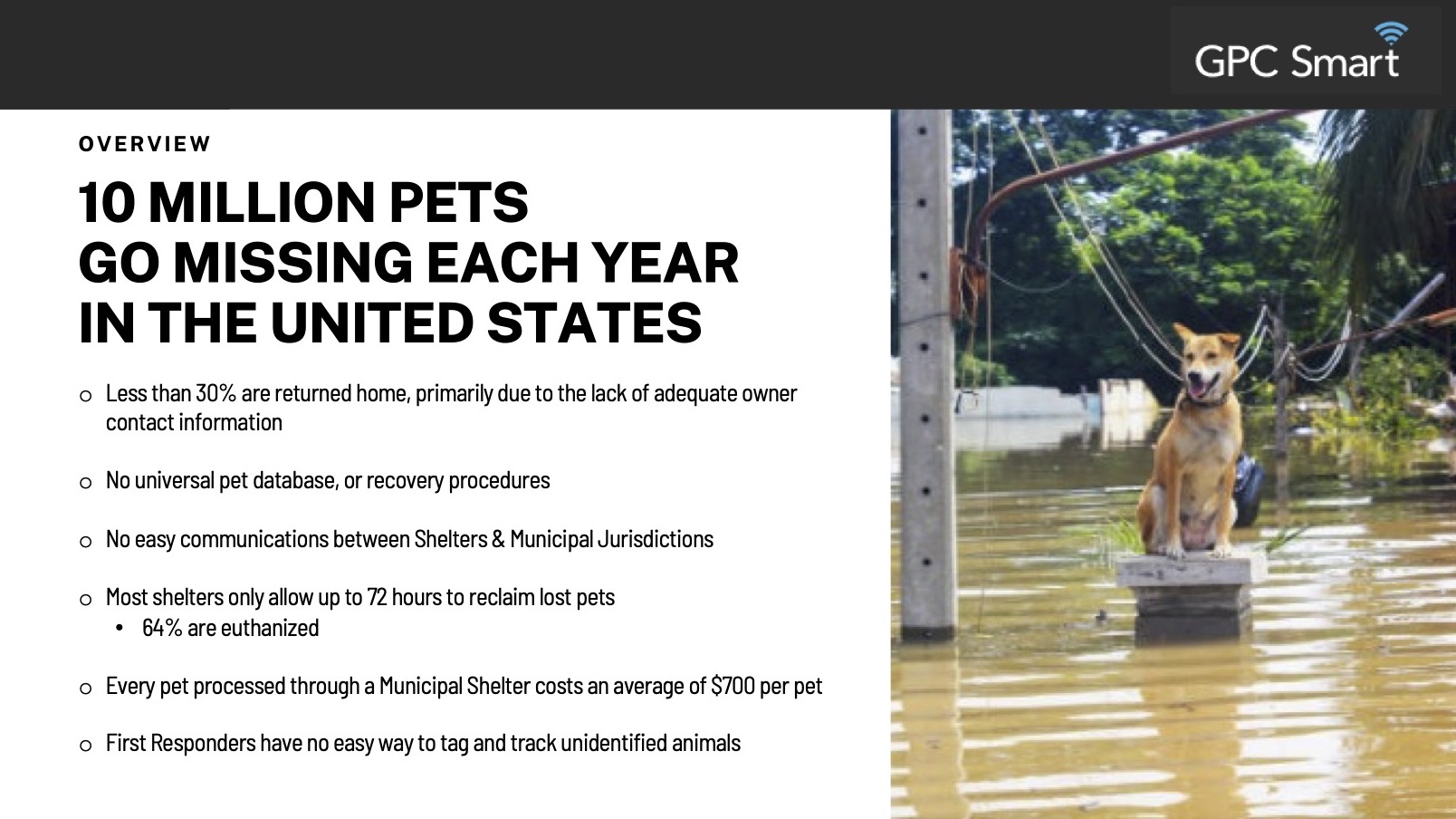 As the company jumps into a market that is relatively well understood, its challenge is not to explain what it does, but how it moves the market forward. The company’s second slide is labeled an “overview” slide, which quickly helps to get an idea of ​​the overall challenge facing this particular market segment.

The investor probably knows at least some of this, but these bullets supplement (or slightly correct) any preconceptions the investor may have, smoothing out the delta between their perception on the market and on realities of being in this market. This slide – while quite wordy – does a really good job of clearing up any misunderstandings an investor might have.

Great overview of the competition

It’s pretty rare to see a startup put the review of its competitors front and center, but I think it was a really smart move in this case. Again, this is not a deep technology play or a market shrouded in mystery. I suspect that most potential investors would be able to find the two main competitors. Addressing this directly seems a bit defensive, but given the market, I think it makes a lot of sense in this case. Here’s how the company addresses it: 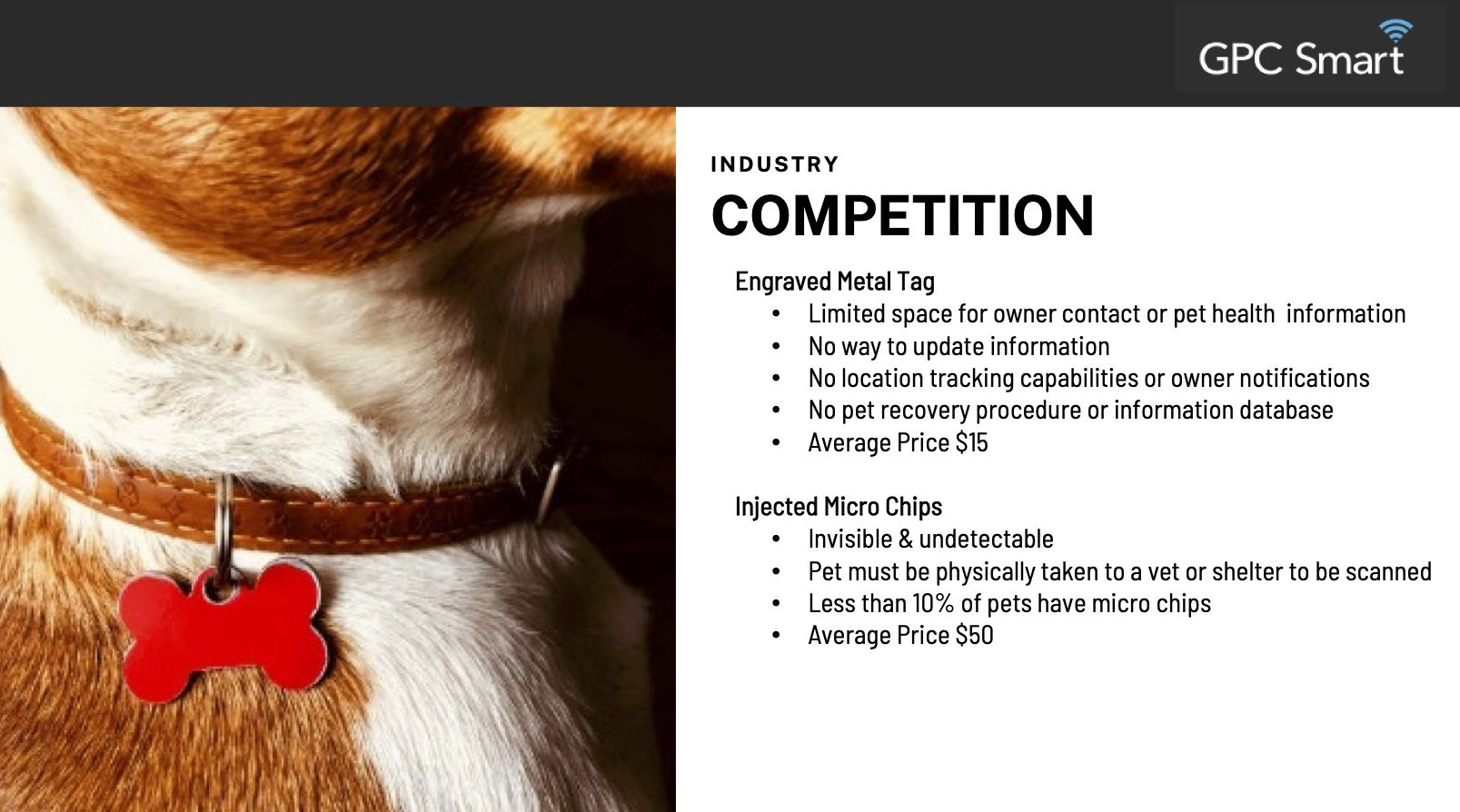 [Slide 3] Dealing with competitive alternatives so early in a slide deck is unusual, but probably a good move in this case. Image Credits: GPC Smart Tags

There are a number of obvious competitors in this space, including the most common, existing engraved metal tags or injected microchips, which have their pros and cons. There is also the latest generation of dog collars with GPS, such as those from Fi, Whistle, Fitbark and others not addressed in this competitive environment.

If the animal is stolen, the thief will simply throw the collar away, and at that point it doesn’t really matter what’s on the collar.

This slide shows an understanding of the competitive landscape. I like that the company chose to address this up front. I think it’s important and a great way to get past the most obvious pushback from investors.

As with the previous slide, although its presence is encouraging, it raises some questions. I think an NFC/QR code dog collar is interesting, but I’m having a hard time seeing how they’re essentially better than standard engraved tags. The exact laser engraved tag in the photo does not cost $15 as stated on the slide, but can be ordered from Amazon – fully customized – for $4with four lines of text on each side of the metal tag.

Of course, you can’t “update” the information, but pet owners can probably afford $4 each time they move or change their phone numbers. You can’t include location information, but someone interested in taking in a stray puppy will probably be able to text or call the owner with an address and details. Again, if the animal is stolen, the thief will simply discard the collar completely, and at that point it doesn’t really matter what’s on the collar. As for tracking, the Apple AirTag might be a good solution for these situations (but it’s just as easy to throw the AirTag into the bushes as any other collar).

This slide shows that the founders understand the challenges with their messaging and positioning, but it also shows that his answers are a work in progress.

Beast in the market

The pet market, both in the US and globally, is fantastically large. Investors know this, but adding a reminder can’t hurt. You don’t have to capture so big of market share to build a very significant business here. 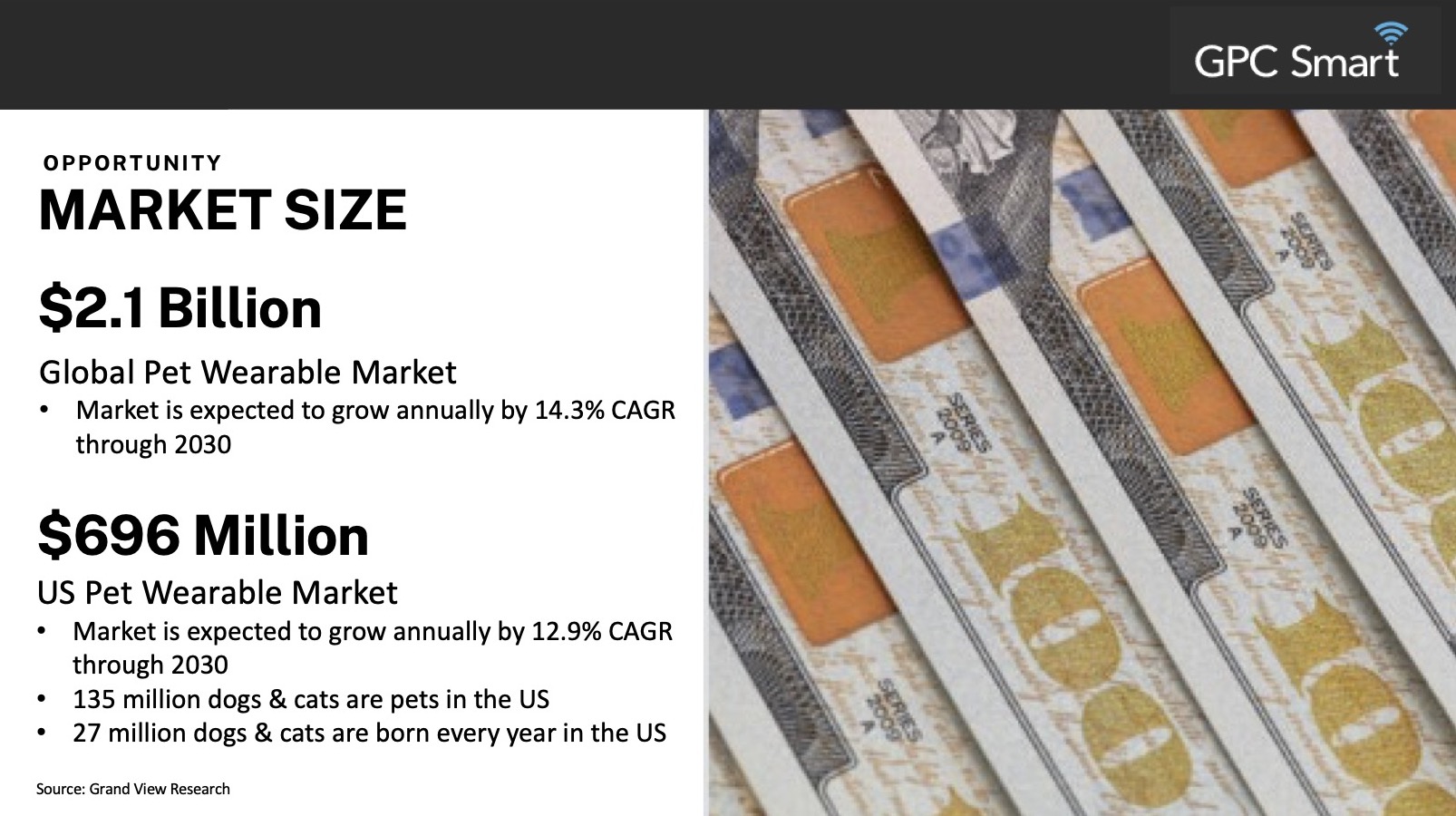 One of the things that investors love more than anything else is a huge and growing market. Pet wearables are definitely eligible in this world, and my gut feeling is that smart wearables (especially GPS trackers) will be a value driver on this front. There is probably a place there for a product like GPC if it is able to play its cards right and find a good market for its customers. Pricing will be critical here; this will be a product for people who want something prettier than an engraved tag, but something simpler (or cheaper/easier to use) than a GPS tracker.

This slide shows the total size of the market, which is great, but I’d like it even more if the company said something about what it thinks its service market is and how it’s going to go after those customers.

The thing you can learn from this slide as a startup? Be clear about the size of your market and show that it is large and trending.

In the rest of this teardown, we’ll look at three things Syneroid could have improved or done differently, along with its full platform!