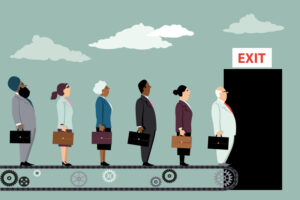 A new study finds that health insurance significantly influences which jobs Americans choose. About 31% of people with employer-sponsored insurance stayed at a job they didn’t like because of the company’s health insurance.

The Forbes Advisor research, published Tuesday, included responses from 2,000 American adults. It was held online from October 28 to November 1.

The survey found that 8% of respondents left a job they liked to seek better health insurance. Another 20% decided to get a full-time job instead of a part-time job so they could get coverage.

As the U.S. faces a major labor shortage, the survey has important implications for employers, said Mark Locastro, a spokesman for Forbes Advisor. There are currently more than 10 million open jobs in the U.S., but only 6 million people are unemployed, according to US Chamber of Commerce.

“The health insurance options that employers provide to their employees can affect workforce numbers and even morale,” LoCastro wrote in an email.

Insurers around the world are expecting an average increase of 10% in health benefits costs to 2023, the largest increase in about 15 years, a recent report by Willis Towers Watson found.

“Knowing how inflation affects so many Americans, payers should work with employers to offer multiple health insurance plan options if possible,” Les Masterson, Forbes Advisor deputy editor and insurance analyst, wrote in an email. “That means offering high-deductible, lower-premium health savings account plans, as well as higher-premium, lower-deductible plans. Health plan benefit design is not one-size-fits-all. Some members would prefer to pay less upfront, while others prefer a plan with higher premiums but lower out-of-pocket costs. Letting people choose between these and others can help with both member and employee satisfaction.”

Additional findings from the report include: