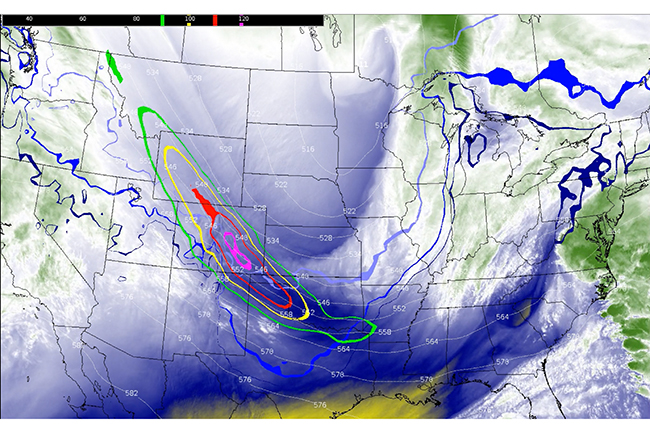 As the savage Arctic cold prepared to sweep south into North America, vivid images based on data from weather models showed us what was about to happen. Now the views from space are showing us what really happened – and the images are no less fascinating.

As predicted by the models, the jet stream took off giant dip in the south on Dec. 21, opening the door to the Arctic and allowing brutally cold air to sweep all the way to the Gulf of Mexico. As this unfolded, a powerful storm system erupted, harnessing the energy of the jet stream and the sharp contrast between temperatures on either side of the cold front. Hardest hit was the Buffalo, New York region, which was dumped in places with 50 inches of snow and where, sadly, at least 28 people lost their lives.

Distortion of the stratospheric polar vortex portends the impending weather bedlamraising the odds that the jet stream, lower in the atmosphere, would take this giant southward plunge.

This infrared view of the action, captured by the GOES-16 satellite on Dec. 21 and 22, shows the movement of water vapor in the atmosphere, helping to reveal the dynamics of the jet stream as the Arctic outbreak unfolds. (Animation courtesy of Satellite Link Blogwhere you can find more views of this extreme weather event.)

The westerly jet winds that circle the Northern Hemisphere naturally develop large northerly and southerly dips like this called “long waves.” Embedded in the long wave seen here is a pocket of powerful energy called a “short wave” that moves quickly in the jet stream’s flow. In the animation, it first appears in the upper left corner, with colored outlines denoting wind speed. At the base of this feature, within the pink contours, winds exceed 120 knots (138 mph).

Short waves embedded in long waves like this are the primary instigators of precipitation episodes—in this case, the powerful and ultimately deadly snowstorm. (For more information on long and short waves see this: https://www.weather.gov/jetstream/longshort)

The curved blue lines superimposed on the water vapor images are contours showing surface temperatures. Temperatures decrease from the darkest blue, around 32 degrees F, to the lightest blue at around 0 degrees F. In particular, keep your eyes on the darkest blue contour with its freezing temperatures. As the arctic outbreak unfolds, it reaches as far south as Texas and Mexico!

You can see evidence of this fierce southward tide of arctic conditions in this animation from the GOES-18 satellite (located at geostationary orbit slightly west of GOES-16). Animation starts at night. As the cold front advances from the north, evidence of its expansion is seen in the form of clouds that appear blue in the animation.

These clouds are the result of the interaction between cold air and warmer conditions in front of it. As a cold front like this advances, the cold air, being denser, pushes warmer air ahead of the front. This pushes warmer air upward, causing small water droplets to condense and form clouds.

In the animation, when night turns to day, the view changes and we see the clouds in a more natural white color. The cold front is very clearly defined as it moves south through Texas all the way to the Gulf of Mexico.

Looking ahead, there are signs that the stratospheric polar vortex may stretch again, which would tip the odds in favor of colder than normal conditions east of the Rockies after mid-January. according to atmospheric scientist Judah Cohen.