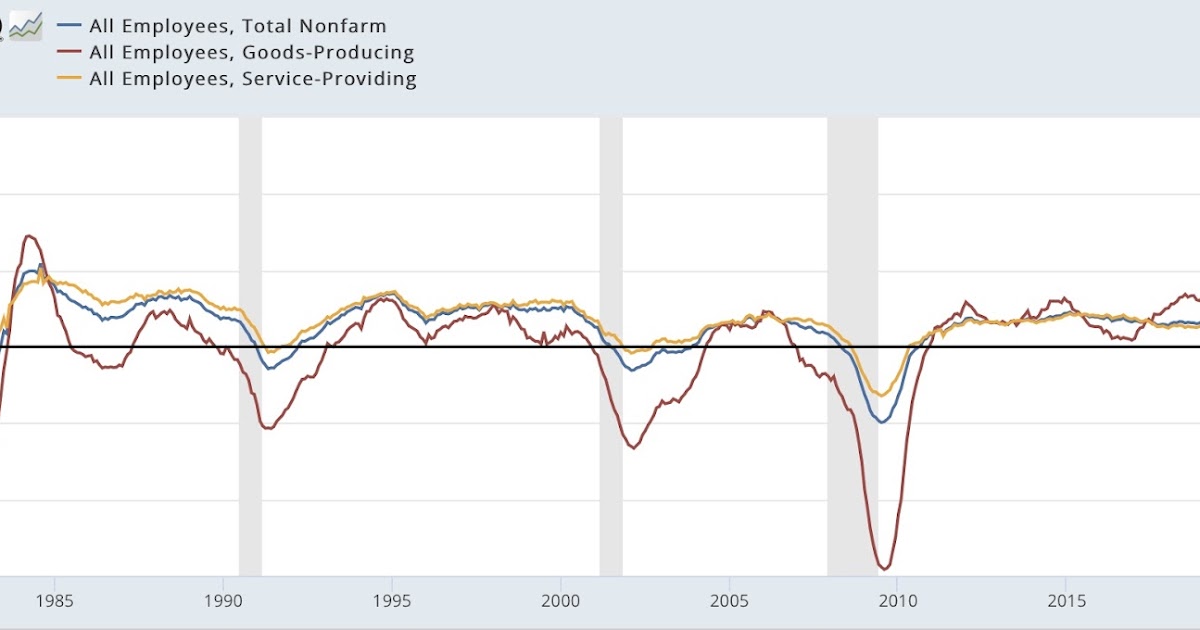 The only significant economic data this week will be released on Thursday, with both the CPI and jobless claims. In the meantime, let’s take a closer look at the jobs data we received last Friday. As stated in the title of this post, the topic was “deceleration”.

Note that goods manufacturing jobs are much more variable; they first declined until, until the Great Recession, service jobs barely declined on an annual basis even during recessions.

Service jobs roared back as things like restaurants reopened in 2021, while goods manufacturing jobs also surged during the boom. Since spring 2022, there has been a consistent slowdown in year-on-year growth across the board (but still positive!), to levels that would have been considered excellent before the pandemic.

Manufacturers add and subtract labor hours before hiring or laying off workers. So it’s no surprise that the manufacturing workweek (red, year-on-year) is one of the 10 components of the Leading Indicators Index. The number of production employees (blue) is as follows:

Note again that year-over-year manufacturing employment growth now would have been considered excellent at any time before the pandemic; while declines in hours in the past have always been consistent with the onset of a recession.

But a look at the monthly change shows a discontinuity over the past few months, as employment gains have been much lower than before during the pandemic recovery:

This is consistent with last week’s ISM manufacturing report for December, which showed both the overall index and the new orders sub-index in line with the onset of recessions in the past:

And here’s a look at production hours, employment and industrial production (gold), all normalized to their recent highs:

While employment is still growing slowly, output likely peaked in October. It would not be a surprise if employment growth in November and December was revised down.

Next, construction jobs (blue) and especially housing jobs (gold) are also leading sectors. Perhaps unsurprisingly, they continue to rise as housing units under construction (red) continue to increase (due to previous difficulties in obtaining building materials such as lumber):

This is definitely one of the bright spots in the economy. I suspect it will soon tip over and maybe fall off a cliff once the lag clears.

Temporary help jobs are also a leading job sector. They have already turned over at rates consistent in the past with the onset of recessions:

On a weekly basis, I track the ASA Staffing Index, which has weakened significantly since last Labor Day: 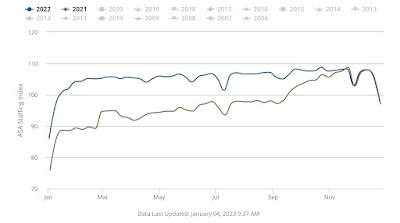 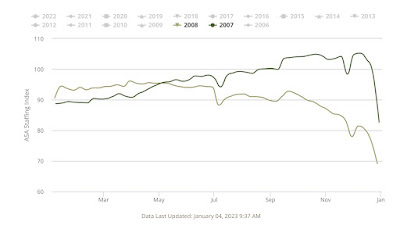 Since then, there have been cases of flat or even somewhat negative annual growth in personnel without recession; but the index’s current reading is consistent with a sluggish economy and consistent with the recent decline in the monthly jobs report.

Then, as I’ve often pointed out, initial jobless claims (blue) lead the jobless rate (red) by several months. Here is the long-term view on a year-over-year basis:

They’re not at recession levels, but they’ve definitely slowed down. I am currently watching to see if the 4-week average of initial claims is moving up on a year-over-year basis.

Finally, real aggregate wages turning negative on an annual basis is a very good indication of the beginning of a recession. Here’s the long-term look at it, broken down into annualized nominal wages versus annualized inflation (so the recession signal is a red line over a blue line):

Both lines are slowing, with the CPI particularly helped by the big drop in gas prices since June. As noted at the beginning of this post, we will get the December CPI on Thursday. I’m expecting another good number since gas prices fell sharply last month. If and when the decline in gas prices ends (very likely this month), the comparison will become much more challenging.