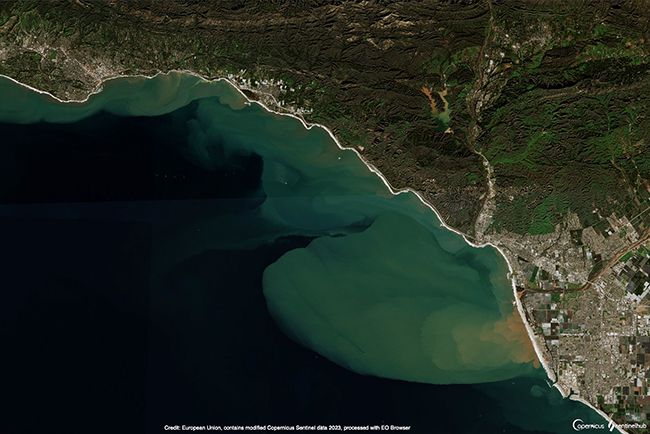 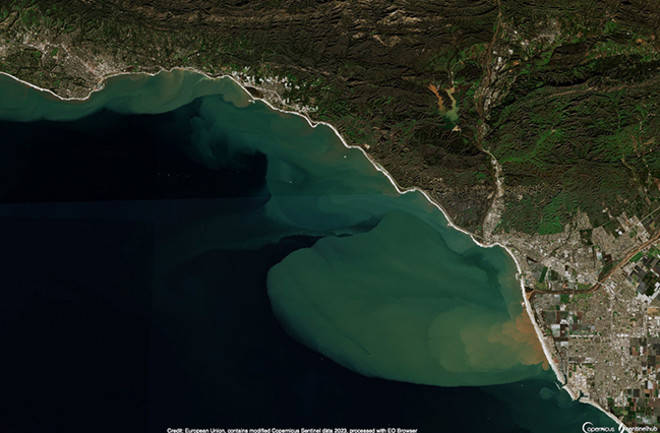 An image obtained by the Sentinel-2 satellite on January 6, 2023, reveals sediment runoff into the sea along the California coast stretching from Oxnard to Santa Barbara. Check out the story below for a before and after animation. (Credit: Modified Copernicus Sentinel data processed by Tom Yulsman)

As a relentless series of atmospheric river storms hit California, some of the environmental impacts became clearly visible from space.

You can see a prime example in the image above taken by the Sentinel-2 satellite on January 6. It shows a section of the Southern California coast stretching from Oxnard in the lower right to Santa Barbara in the upper left. Raging currents and floods have dumped massive amounts of sediment into the sea, staining large stretches of coastal waters in tones ranging from turquoise to orange.

To get an idea of ​​what these waters would normally look like, check out this animation comparing the January 6 scene to an image captured by the satellite one year ago today:

Before and after animation of images received by the Sentinel 2 satellite. (Credit: Copernicus Sentinel Image Data; animation by Tom Yulsman)

The lack of sediment in the coastal waters a year ago is obvious. But also consider how much greener the landscape is now. I don’t think this is an illusion resulting from different lighting conditions between the two images. I checked something known as NDVIwhich is a way to estimate green vegetation in remote sensing images, and the landscaping looks very real.

Precipitation totals for much of California are plotted here for the 14-day period between December 29, 2022, and January 11, 2023. Along the Pacific coast, the map stretches from the Mexican border north to just beyond the Monterey Peninsula. (Credit: NOAA)

As the map above shows, the amount of precipitation that has fallen over this region and other parts of California is truly staggering. The mountains that run east-west along the coast in this part of the state have received some of the highest rainfall totals.

The storm is not over yet. As the National Weather Service said tweet today“A series of atmospheric rivers will continue to affect the western US, creating additional periods of heavy rain, snow and flooding in California next week.”