The End of the Dinosaurs: The End-Cretaceous Mass Extinction 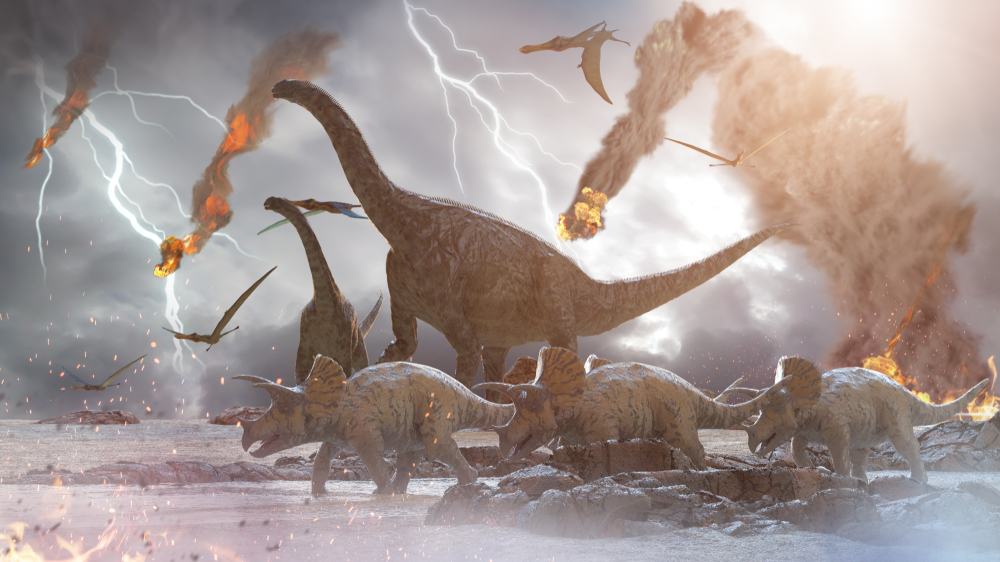 In the late Cretaceous, dinosaurs ruled the earth. They were the most diverse and widespread land animals on the planet.

“Most large terrestrial niches were occupied by dinosaurs, especially towards the end of the Cretaceous,” said Chris Torres, a postdoctoral researcher and paleontologist at Ohio State University.

Dinosaurs were not monolithic. They were fierce predators, horned mega herbivores, feathered scavengers and pint-sized foragers. However, 65 million years ago, the majority of these ancient reptiles have disappeared from the fossil record. It’s a mystery that has fascinated scientists and students for decades (as well as students-turned-scientists, like Torres).

Dinosaurs are not the only victims of extinction. More than 60 percent of species have died globally. in the oceans whole genera of invertebrates died out. On land, gymnosperms and angiosperms, groups that include most modern trees, barely survived.

The cause of the Cretaceous-Tertiary (KT) extinction, or the Cretaceous-Paleogene (KPg) extinction, as it is interchangeably called, is hotly debated in the scientific community. However, most experts agree that one particular event is an important, if not the complete, cause.

At the end of the Cretaceous, a large meteor fell on the Yucatan Peninsula in present-day Mexico. The impact spewed magma, debris and vapor into the atmosphere, ignited wildfires and sent massive tsunamis around the world. A period of intense cold and darkness followed an initial heat wave as aerosols and particles blocked the sun. Sulfates from the atmosphere acidify the oceans.

What you didn’t know about KT’s disappearance:

Ultimately, time moderated the catastrophic climate of the CT extinction event. As conditions became habitable again, the survivors of the event thrived and diversified. These organisms are the ancestors of life as we know it.

Mammals, a relatively unremarkable group of small nocturnal organisms during the Cretaceous, widespread during the Paleogene. The absence of dinosaurs allowed them to expand into new, diverse ecological roles. Large, leafy angiosperms that were formerly fewer than gymnosperms, gave birth to modern rainforests. In many places, these survivors have evolved together to rely on each other.

Descendants of the dinosaurs

One group of dinosaurs remained: birds. As is the case with most survivors of the KT extinction, it is not clear why. in a recent article published in Scientific progressTorres and his colleagues proposed a theory: birds may have survived thanks to their brains.

“Birds are incredibly intelligent organisms,” says Torres. “Some groups of birds, such as parrots and crows, have a density of brain cells that is so high that it surpasses most mammals, even most primates.”

To gain insight into the evolution of modern bird brains, the researchers focused on birds’ evolutionary cousins: Ichthyornis. These toothed sea urchins were closely related to the ancestors of modern birds, but did not survive the KT extinction.

Using a fossil of an Ichthyornis skull, scientists recreated a model of his brain. Despite other similarities between the relatives, ichthyornis the brain is structured in a fundamentally different way than the brain of a modern bird.

“The forebrain of modern birds is gigantic compared to the rest of the brain,” says Torres. “Much more than apparently any other birds that would have been around at the end of the Cretaceous.”

Read more: What species today are descendants of dinosaurs?

Torres cautions no one to think of this as proof that birds survived “because they were smarter.” However, their evolutionary success appears to be somehow related to their cognitive function. Humans process sensory information and make critical decisions in the forebrain. In birds, something like critical thinking skills may have allowed them to develop survival tactics in the wilderness after a meteor strike.

“It probably has something to do with behavioral plasticity, the ability to draw on a wide repertoire of behaviors depending on the circumstances around you,” says Torres.

Sixty-five million years later, birds are some of the most evolutionarily successful animals on the planet. They occupy many ecological niches that were once dominated by their non-avian dinosaur cousins. In a sense, they have inherited the earth.

“There are no other terrestrial vertebrates that are as successful or as diverse as birds,” says Torres.