The Federal Reserve seems determined to trigger a Volcker-like recession Yesterday, the Fed raised rates by another 0.75%. Over the past 8 months, the Fed has raised rates by a total of 3.75%. This is one of the steepest rate hikes ever, surpassed only by the pace of the two oil shocks of the 1970s (1974 and 1979) and Volcker’s inflationary jihad of 1981, as shown in the chart below of the year-over-year change in the Fed funds rate. Note that yesterday’s increase is still not showing on the chart, so I subtracted 3.75% to show the current rate as 0:

With the exception of Volcker’s jihad of 1981, this equates to the steepest pace of Fed rate hikes in history.

We already know the general economic background for this, but I want to focus on two points.

First, the pace of wage growth, while high by historical standards, has already slowed over the past few months. Via Wolf Street, here’s a chart from yesterday’s ADP National Employment Report for October comparing the year-over-year wage increase for those staying in jobs (7.7%) versus those changing jobs (15.2%): 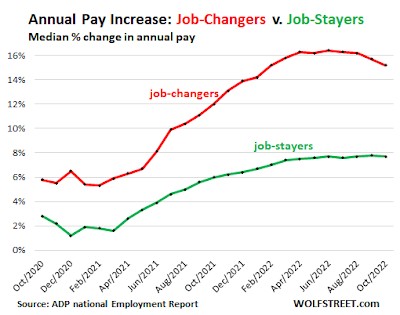 This is the game of inverted musical chairs I’ve been describing for almost a year. With so many job openings, changing jobs for higher pay is a lucrative decision.

And here’s a graph showing the ratio of vacancies to actual hires from the JOLTS report (blue) versus the year-over-year change in nonsupervisory wages (red):

Next, here’s the chart I reviewed a few weeks ago regarding home prices, showing that while the year-over-year change in home prices is still high by historical standards, both major indices have shown sharp decelerations over the past few months ( and indeed, on a seasonally adjusted monthly basis they have actually declined):

Finally, here are the gas prices for the past year:

In other words, three of the big sources of inflation—house prices, wages, and gas prices—are already moving in the right direction, ie. are slowing, although in absolute terms they are still up sharply year-on-year.

For historical comparison, as I wrote a few months ago, this is very similar to the immediate post-World War II boom of 1946-48, which featured inflation peaking at nearly 20% per year (including similar increases in house prices and wages). . The Federal Reserve did *absolutely nothing!* There was a 10-month relatively shallow recession (-1.7% decline in real GDP) in 1948-49:

With that in mind, and because the Fed’s rate hikes are lagging, you might expect the Fed to signal a wait-and-see attitude as to whether the rate hikes that have already taken place will continue to reduce inflation.

But that’s not at all what the Fed and Chairman Powell said. Here is a quote from the official rate hike statement:

﻿ The Committee expects that the current increases in the target range will be adequate to achieve a monetary policy stance that is sufficiently restrictive to return inflation to 2 percent over time. In determining the pace of future target range increases…”

And here are some quotes from Powell’s subsequent press conference:

“We need to raise to the level that is restrictive enough to bring inflation to the 2% target over time. We included this in our post-meeting statement. Because that really becomes the important question now, how far to go.

“We think there is a lot to cover before we run this test. That’s why we say current rate increases will be appropriate. As I mentioned, the inter-meeting inputs, like the strong labor market report, but especially the CPI report, suggest to me that we may be moving higher than we thought at the September meeting. However, this level is very uncertain. I’d say we’ll find it in time.

“As we get more into restrictive territory, the question of speed becomes less important than the second and third questions. That is why I said it was appropriate to slow down the rate of increases. So that time is coming. And it can come right after the next meeting or the one after that. No decision has been made. We will probably discuss this at the next meeting.

“I would also say that it is premature to discuss a break. It’s not something we think about. This really isn’t a conversation that needs to be had now. We have a way to go.

So let’s look at what happened in response to the Fed’s huge rate hikes in the 1970s and early 1980s:

Since Powell clearly intends to catch up with Volcker, this is my model for the recession ahead.