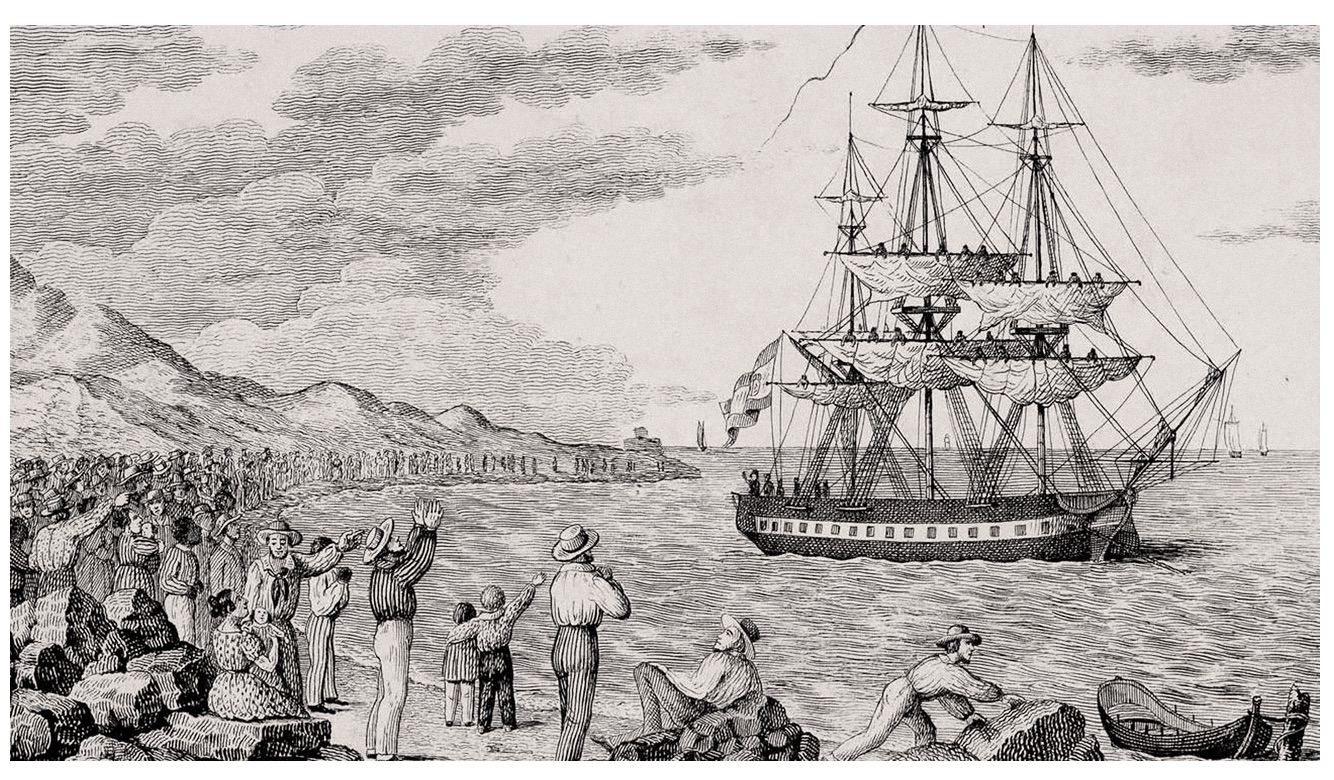 On November 30, 1803, military doctor Francisco Xavier de Balmis set out from the port of La Coruña in northwestern Spain on what would become a three-year mission. On board with him were 22 orphaned boys. Their goal: to complete the first global immunization campaign.

The world was riddled with smallpox, which killed a third of all those infected. Although Edward Jenner had discovered in 1797 that pus from cowpox blisters could be used as a vaccine, most of the world did not have access to vaccination. Cowpox was such a local disease, found mostly in England and occasionally in France or Italy, that it was not clear how anyone could spread the vaccination to more people.

Scientists haven’t discovered the germ theory yet, so no one knows what a virus is. They knew they had to spread cowpox to keep the vaccine alive, but previous methods, such as placing active disease material (in other words, pus) from an infected person on cloth or in a vial and rubbing it into a recipient’s wound, didn’t work over long distances. Taking a whole cow to disease outbreaks was equally impractical. Today, such viral material is kept alive by refrigeration, a technology and know-how that scientists simply did not have at the time.

Jenner eventually came to the realization that she could remove the cow from the vaccination equation. He discovered that by taking pus from the cowpox blisters of a vaccinated person and placing it on the hands of others, he could create a “warm chain”: hand-to-hand vaccination.

While Jenner was making and publicizing his discoveries, King Charles IV of Spain watched in horror as family members and millions of people in his colonies were felled by smallpox. He conceived a grand mission, the Royal Philanthropic Vaccine Expedition, which would take the vaccine to America, save its people, and make the Spanish Empire the first with a solid plan against smallpox. But the king needed someone to lead the mission, someone who could turn these ideals into reality—a difficult task.

Balmis was the perfect candidate. The then 50-year-old was a military doctor who spent years overseas studying alternative medicine in Mexico and Central America. Besides, he had just translated the book The historical and practical treatise on vaccine by JL Moreau de la Sarthe, the most comprehensive study of vaccines at the time, in Spanish from the original French. Balmis heeded the king’s call, and when he learned of Jenner’s hand-in-hand method, he knew it was just what he needed. He would bring vaccination to America through human bodies.

The kids were key

Balmis could not accept adults. Smallpox was so incredibly contagious that every living adult had probably already experienced the disease, and anyone with pre-existing immunity would not have been able to develop the blisters needed to collect more pus and spread the vaccine.

Children are the only subpopulation that can keep the vaccine alive, so Balmis recruited 22 orphaned boys between the ages of 3 and 10. King Charles announced that the crown would care for all these boys as compensation for their bravery, covering all costs associated with the boys’ welfare and providing for their education and funding until they were old enough to support themselves.

In addition to the boys and regular sailing crew, Balmis had three assistants, two doctors, three nurses, a secretary, and Isabel Zendal Gómez, director of the orphanage in La Coruña, who served as the boys’ primary caretaker. The expedition would sail to all the Spanish colonies, but the plan went beyond simply vaccinating the colonists. Balmis and his staff will also distribute copies of his translated book to help educate doctors about the current science, train doctors to administer the vaccine and help form central vaccination councils in each location.

Balmis paired the boys up, vaccinating the first two boys just before the ship went down. their ship, Maria Pita, then took to the seas. About nine days after vaccination, the boys developed the typical cowpox lesions on their bodies. Balmis and his medical team took the pus from these two children and used it to vaccinate the next two boys, going through this routine with each subsequent pair to keep the vaccine alive. With such a high-stakes mission, Balmis had to vaccinate two boys at once as insurance that if something happened to one child, the vaccine would not be lost.

The Maria Pita headed for Puerto Rico, stopping en route at the Canary Islands to vaccinate the Spanish colonies there, and landed on February 9, 1804. It was anticlimactic. With some luck, others had been able to transfer active disease material in the form of encrusted lymph fluid from England to other nearby islands and then to Puerto Rico. Most of the population was already vaccinated.

So the expedition left for its next stop, Venezuela, docking on March 20 just in time – only one of the vaccinated boys still had active pus blisters to drain from. Balmis ran out as soon as they landed, immediately vaccinating 28 local children to keep the vaccine tank alive.

After administering the vaccine to a reported 12,000 individuals in Venezuela, Balmis was torn apart. There was so much ground to cover, both down in South America, in Mexico to the north, and beyond. For expediency, he decided it was best to split the trip in two: his deputy, Jose Salvani, would travel to Colombia, Peru, Ecuador, Bolivia, and the rest of Spanish South America. Balmis would head to Cuba, Mexico and the Spanish colonies in Asia. And so Balmis’s expedition branches out, and the two leaders go their separate ways with new groups of boys – brought together with the help of local authorities, the Catholic Church and family volunteers – as carriers of the vaccine.

Balmis toured the globe, and deputies Jose Salvani and Manuel Grajales traveled throughout South America, each vaccinating the public and educating local doctors along the way. (Credit: Kellie Jaeger for Discover)

Balmis spent the following months in Cuba and then in various regions of Mexico. Some populations were already vaccinated, some communities were skeptical of the foreign vaccine, and some regional leaders confronted the willful Balmis—this was only seven years before the start of the Mexican War of Independence in 1810, and the people in the territories of New Spain did not tended to cooperate with the Spanish crown.

At times it looked like the cowpox vaccine would dry up and the expedition would be called off. But despite close calls due to stormy weather and travel delays, Balmis persevered with the vaccine intact. At each stop, he always instructed the new doctors on how to schedule vaccinations to best keep cowpox alive. He also helped local authorities set up vaccination institutions to monitor and track the doses administered. Versions of some of these vaccines still exist today. Although the data is incomplete, experts today believe that the team was able to vaccinate 100,000 to 150,000 people in the Americas.

Balmis then set out for the Spanish colonies in the Philippines in February 1805. After repeating his efforts there, he was ready to go home; he sailed east with a small crew and three new boys, stopping to vaccinate Macau (a Portuguese colony) and Canton, and finally made his way to Europe in 1806.

After a short stop in St. Helena, the exhausted doctor arrived in his homeland in September. Back in Spain almost three years after his departure, Balmis received a warm welcome from King Charles and widespread praise for his efforts.

“Balmis saw vaccination as public health, and there are people who call the Balmis expedition the first global public health vaccination campaign,” says Jose Esparza, a Venezuelan physician and virologist at the University of Maryland who has extensively researched the expedition. “At that time, vaccination was seen mostly as a means of preventing individual disease in humans rather than as a public health enterprise.”

A sculptural monument to the Balmis expedition stands in the port of La Coruña. (Credit: Caronium, Wikimedia Commons)

The vaccine often preceded Balmis in various communities, but none of the places he visited had established mass vaccination initiatives. There were individual initiatives, but no organized vaccination campaign. “Perhaps the lesson here is that we should pursue both goals of vaccination,” Esparza says. “Protecting people, but also protecting societies.”

Of course, Balmis’s expedition was not made out of philanthropy alone – the loss of masses of people to smallpox was an economic detriment to the Spanish crown, and by vaccinating non-Spanish territories Balmis hoped to improve international relations. But the vaccine was always free. Balmis often even pays families to vaccinate their children.

At that time, the Spanish Empire was the largest in the world. They brought the vaccine to territories on three continents and two oceans — an incredible example of what we can achieve when higher-income countries mobilize to help lower-income countries, says Enrique Soto, a geriatric oncologist at Instituto Nacional de Ciencias Médicas y Nutrición Salvador Zubiran in Mexico City, who wrote about the Balmis expedition.

The Royal Philanthropic Vaccine Expedition is a historical journey that tells a lot about the history of vaccination campaigns, Soto says, but also reveals all the lessons we haven’t learned. Hesitancy about vaccines, for example, is nothing new, which is why clear and proactive scientific communication is paramount. “If we have vaccines and people don’t take them, then the vaccines are useless.”

Soto adds that there are several parallels between the Balmis expedition and COVAX, the UN’s effort to produce and distribute tests, treatments and vaccines for COVID-19 globally and equitably. It’s amazing, he says, that our technology has advanced so much since the 1800s, but international cooperation and philanthropy are still so difficult to achieve.

To date, smallpox is the only infectious disease in humans that has ever been eradicated—a feat achieved only through the initiative and action taken by a few pioneers who understood that handling an infectious disease properly meant protecting everyone.

The history of the Balmis expedition is little known, Soto says. But it needs to be talked about more, Esparza says, “because the people involved are heroes, and these nurses were the first global public health nurses in history. It’s such an amazing story.”