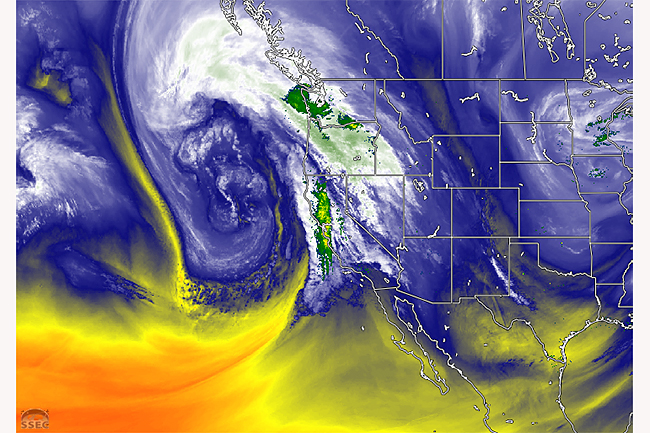 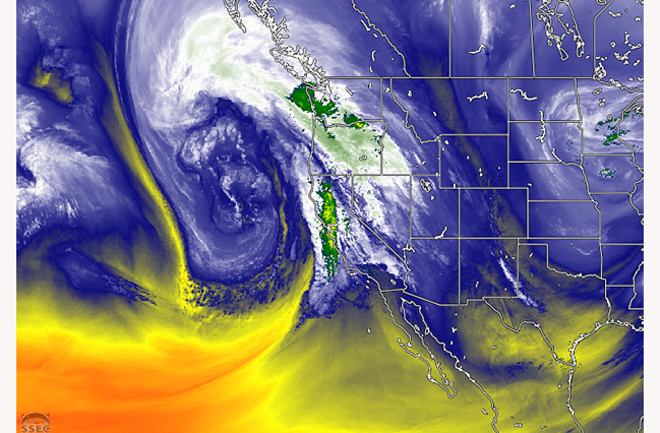 A view of water vapor in the atmosphere obtained by the GOES-18 satellite overlaid with data from the NEXRAD weather radar. This combination shows the impact of the atmospheric river storm that hit California and other parts of the West Coast. See below for an animation of the same scene. (Credit: SSEC RealEarth)

The now-famous Pacific “bomb” cyclone, linked to a wave-like jet stream — and boosted by climate change — sent a river of moisture toward California, causing deadly downpours and gusts of ferocious winds.

A similar atmospheric river event in late December may have been transmitted more than 220 million pounds of water through the atmosphere over the Pacific coast every second, according to Washington Post meteorologist Matthew Cappucci. The current storm may have reached that intensity.

It has already claimed two lives, including a toddler, and as of Thursday morning, January 5, was blasting the California coast with hurricane-force winds along with persistent rain. according to CNN. Almost the entire population of the state is under a flood watch.

Satellite imagery is one way to appreciate the sheer scope and power of this storm. The image at the top of this post combines an infrared view from the GOES-18 satellite with NEXRAD radar data to provide a fascinating visualization that shows atmospheric water vapor and precipitation rates. (The latter is depicted in green and yellow tones.)

This still image is one frame of animation showing the swirling storm and its impact:

An infrared view of water vapor in the atmosphere taken by the GOES-18 satellite, combined with data from the NEXRAD weather radar, provides a compelling view of the storm rocking California. (Credit: SSEC RealEarth)

The animation starts at 10:30am West Coast time and ends at the same time today (Thursday, January 5). Once again, the view shows water vapor in the atmosphere and a radar image of precipitation.

A wide satellite view of the bomb cyclone spinning in the Pacific Ocean and helping to direct a river of atmospheric water toward the Pacific coast of North America. (Credit: SLIDER/RAMMB)

This GOES-18 image animation provides a wider view of the bomb cyclone as it helped guide the atmospheric river of moisture to the Pacific coast. It starts at 16:00 local time on Tuesday, January 3 and runs until 12:00 on Wednesday.

By my rough estimate, the cyclone extends at least 1,400 miles from the Pacific Ocean. That’s roughly equal to the distance between Los Angeles and Omaha!

As it developed, the cyclone was carried across the Pacific Ocean by the jet stream. Large dips to the south in this high-altitude river of air have allowed storms to collect abundant moisture in the subtropics.

Another storm is looming this weekend.