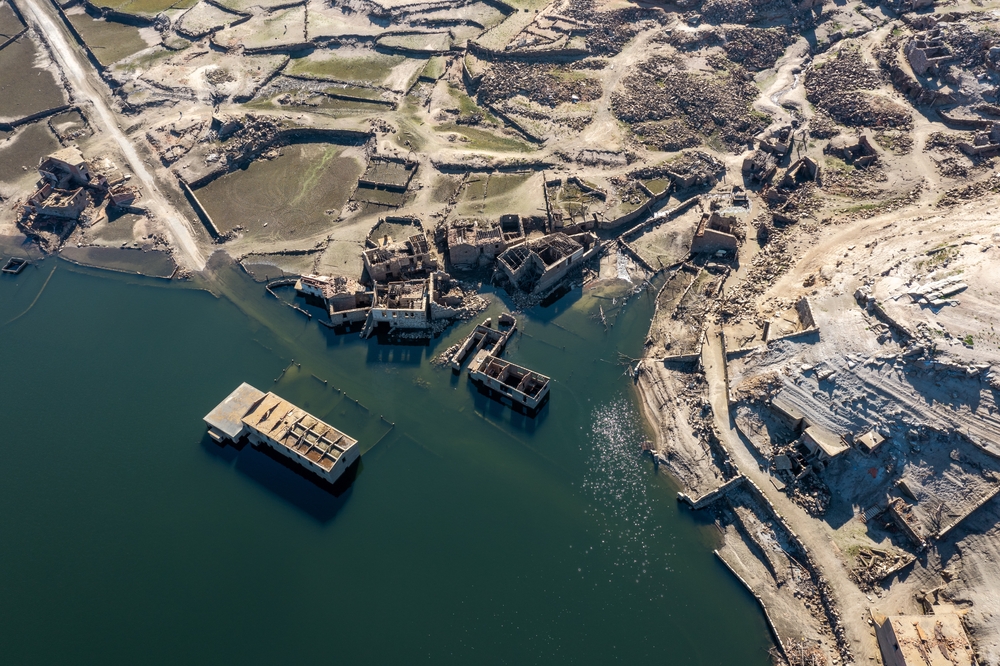 Lakes Mead and Lake Powell aren’t the only bodies of water suffering from drought. Along with the American Southwest, parts of Europe including the UK, France, Italy, Spain, Portugal, Germany and the Netherlands are likely to face the worst drought in 500 years.

Water levels in major rivers and lakes have dropped dramatically and remnants of the past have emerged. People can now see the gruesome hunger stones and bomb left over from WWII.

Read more: Shipwrecks and lost cities rise to the surface in Lake Mead

Famine stones are a common marker in some European rivers. From the German word hungerstein, hunger stones mark water levels during severe drought. They remind and warn future generations of the hardships suffered in the past as you can see the carved years of past droughts.

A remarkable starving stone has resurfaced in the Elbe River near Decin, Czech Republic. It bears the warning “Wenn du mich siehst, dann weine”, which means “If you see me, cry”. The Famine Stones are found in the Elbe River when the water level is low, and the dates carved into the rock go back to 1417 and 1616. The latest is from 2018, during a massive heat wave.

Lake Mead isn’t the only drying body of water to reveal a World War II-era artifact. Like Po — the longest river in Italy — dries up, an undetonated WWII bomb resurfaced. Fishermen found a 1,000-pound bomb near Borgo Virgilio.

The Italian military expertly removed the US-made bomb and moved it to a detonation site 30 miles from where it was found and evacuated the area for safety. Nearly 3,000 people had to leave the area, and although there was some pushback, everyone eventually left.

The Italian military successfully detonated the bomb, saying it contained more than 530 kilograms of explosives.

The shrinking Po also revealed Barge Zibelloa World War II ship used by the Germans before sinking in 1943. Although past droughts have exposed the bow of this ship, the barge is now almost visible from bow to stern.

It looks a lot like the ghost town of St. Thomas, Nevada, which was submerged after the Hoover Dam created Lake Mead, some European cities were swallowed up as reservoirs were made. These cities haven’t seen the surface in decades—until now.

The village of Aceredo, Spain, flooded in 1992 when the Alto Lindoso reservoir filled. Now that the reservoir is at 15 percent capacity, the former residents of this ghost town have returned to see the remains of their homes. While it was possible to see the roofs of houses in the flooded village during the dry season, the entire village is now fully exposed.

Along with the ruins of Aceredo, church ruins in Ladybower Reservoir in Derbyshire have appeared. The church spire was left standing after the reservoir was filled in 1940, but was demolished in 1947 as a precaution.

Dolmen of Guadalperalor “the Spanish Stonehenge” also appeared in Valdecanas Tank in Spain. After its discovery in 1926 by Hugo Obermayer, a German archaeologist, it was sunk in 1963 due to development projects. Since then, it has resurfaced at least four times, but researchers have struggled to study it.