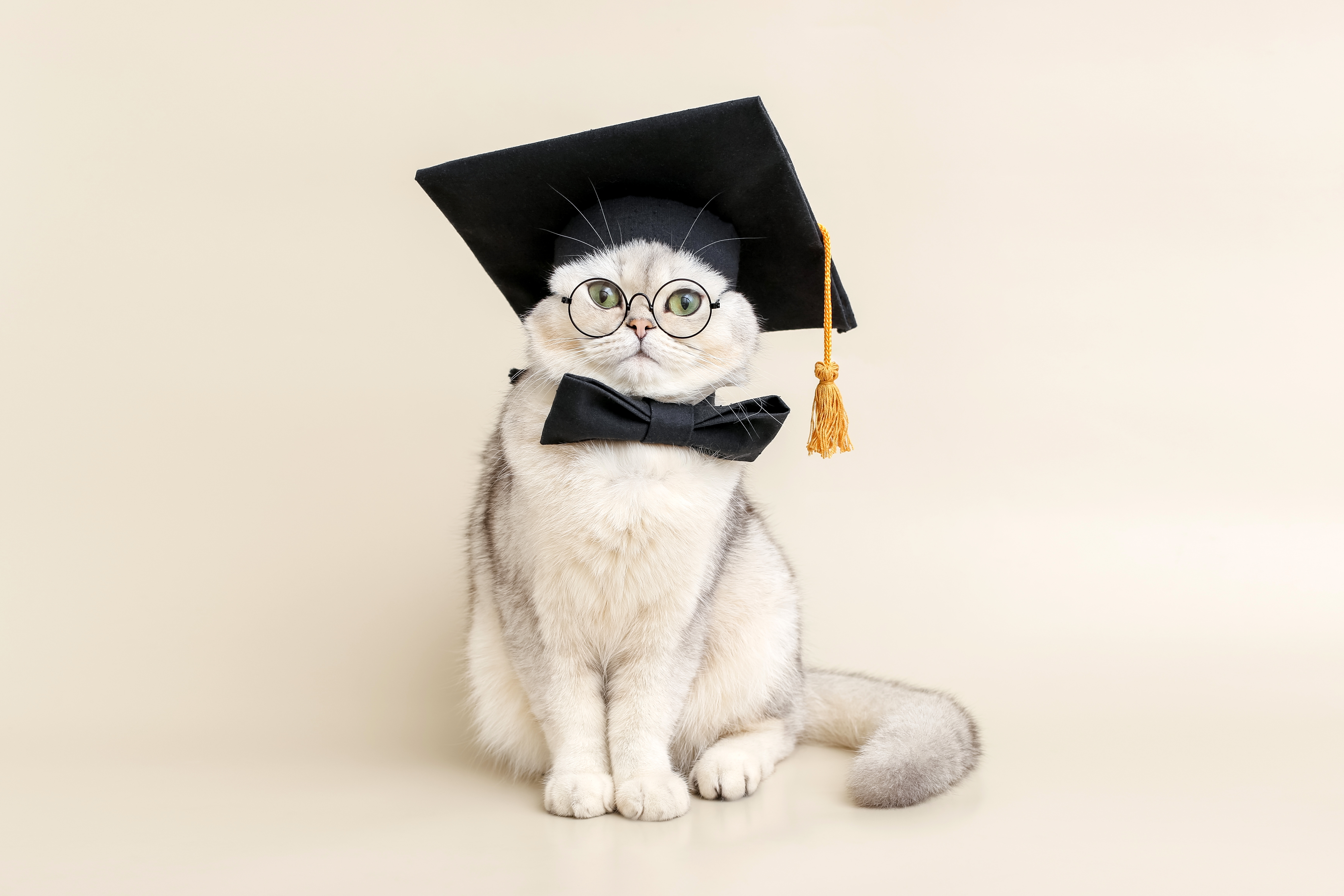 The Annals of Science are full to cat lovers. It turns out that many famous scientists not only had cats, but sometimes even credited their feline companions with helping them advance their work (or at least distracting them from it). Here are five feline collaborators who have “worked” closely with some of the most famous scientific names in history.

Albert Einstein is known to have loved animals. “If a man aspires to a righteous life, his first act of abstinence is from harming animals,” he said, and he himself was known to own numerous pets, including a dog and a parrot. But it was his cat tiger which seems to have attracted the most attention, at least as far as posterity is concerned. Biographers have recorded that Einstein was sensitive to Tiger’s moods, noting, for example, that the cat became depressed when it rained.

Cats apparently hold a big enough place in Einstein’s heart that they pop up in quotes historically attributed to him. In his analogy explaining the telegraph, Einstein is said to have likened technology to a long cat. “You pull his tail in New York and his head meows in Los Angeles,” he said. Cats were less helpful in helping to explain his own work in the special and general relativity, which won him eternal fame. Still, there is no doubt that Einstein enjoyed Tiger’s company, especially when he was struggling, as we all are at times, in his work and life.

“There are two refuges from the misery of life: music and cats,” Einstein said.

Even the least astronomy-savvy reader knows Hubble’s name from the namesake space telescopeif nothing else. Edwin Hubble is known for his work in the first half of the 20th century. His discovery of galaxies beyond the Milky Way was revolutionary for the time, as was his work in support of the theory that the universe is expanding. To say he helped redefine the field is a gross understatement. And he didn’t do it alone.

If there was a Hubble Center of the Universe, you can bet that his cat, Nicolaus Copernicus, lived there, making his favorite nuisance. According to Huntington Librarywhere Hubble’s personal papers are kept, references to the giant black cat abound in the archives.

He was clearly the favorite of the family. Hubble often referred to his home as “Nicolas’ mansion.” And in her diary, Hubble’s wife Grace noted the close relationship between her husband and the cat. In a moment that any cat owner will recognize, Grace noted that when Edwin retired to his office to work, Nicholas enjoyed lounging on Edwin’s desk, “spread over as many pages as he could cover.” she writes. “He helps me,” [Edwin] explained.”

Legend has it that between developing the fundamental laws of motion and gravitation, doing groundbreaking work on optics, and helping to invent calculus, the great Sir Isaac Newton also found time to invent the cat flap.

As one version of the story goes, when Newton was in Cambridge, he requested that a hole be made in his door and a leather or cloth cover placed over it, so that his cat, Spithead, could come and go at will. Cat owners around the world can easily imagine the father of modern science distracted by the screeching and meowing of a cat wanting to be let out… and then 30 seconds later you to be let back out. So the story definitely seems true.

But feelings are not facts. While some scholars debate whether Newton even there was cat, the historical evidence makes it pretty clear that he did not invent the cat door. Among other things, cutting a hole in a neck – even one that you can put a lid on – hardly qualifies as an invention. People have been cutting holes in doors and walls for thousands of years – even before us domesticated cats — to allow feral cats access to barns and barns. They could then hunt the pests that fed on our food supply.

But just as parasites attract cats, so great men often attract their share of legends over time, and Newton was no different. As funny as this cat story is, it’s just as dubious as that story about an apple clone of Newton on the head.

The most famous cat in the history of science is named after physicist and Nobel laureate Erwin Schrödinger, who won the honor in 1933 for his early work in quantum mechanics. But he is best known for a thought experiment involving a theoretical cat in a box and whether it can be said to be both dead and alive. Schrödinger proposed the scenario in document from 1935 as a critique of quantum theory at the time.

Known forever as “Schrödinger’s Cat,” the paradoxical thought experiment has become permanent—albeit often misunderstood — device both in science and in popular culture.

People sometimes wonder why Schrödinger used a cat in his example, instead of a rat or a plant or almost any other living thing. Some stories claim that Schrödinger had actual cat, named Milton, and conclude that the pet may have provided some inspiration for physics.

However, Milton may – or may not – have existed at all; the evidence for the ownership of Schrödinger’s cat is scant at best. But then Schrödinger, we are forced to note, was nice schematic myself.

A brilliant but eccentric pioneer of electricity, Nikola Tesla has become something of an icon for science geeks everywhere. It turns out that Tesla himself was somewhat of a fan, at least when it came to his childhood pet Machak, whom Tesla once described as “the prettiest of all the cats in the world.”

IN a letter written to a young admirer in 1939, Tesla extols the virtues of the cat to some extent; the man was then 80 years old, but time had clearly not diminished Tesla’s love for Machak.

He told the story of one winter evening when he found himself stroking Machak’s back. In a moment that inspired his lifelong study of electricity, Tesla was shocked—literally—to find that the cat’s back had turned into “a sheet of light, and my hand produced a shower of sparks loud enough to be heard throughout the house. ” It was quite a dramatic moment – his mother told him to stop for fear of starting a fire.

Fortunately, for Tesla’s family and for posterity, the only thing Macak ignited that night was the imagination and far-sighted mind of young Nikola, who presently fell into philosophy, wondering if all nature was but one giant cat to be the caressing hand of God.

Yes your cat says that sounds about right.