Deep insight into production and sales: evidence of reaching the top in both 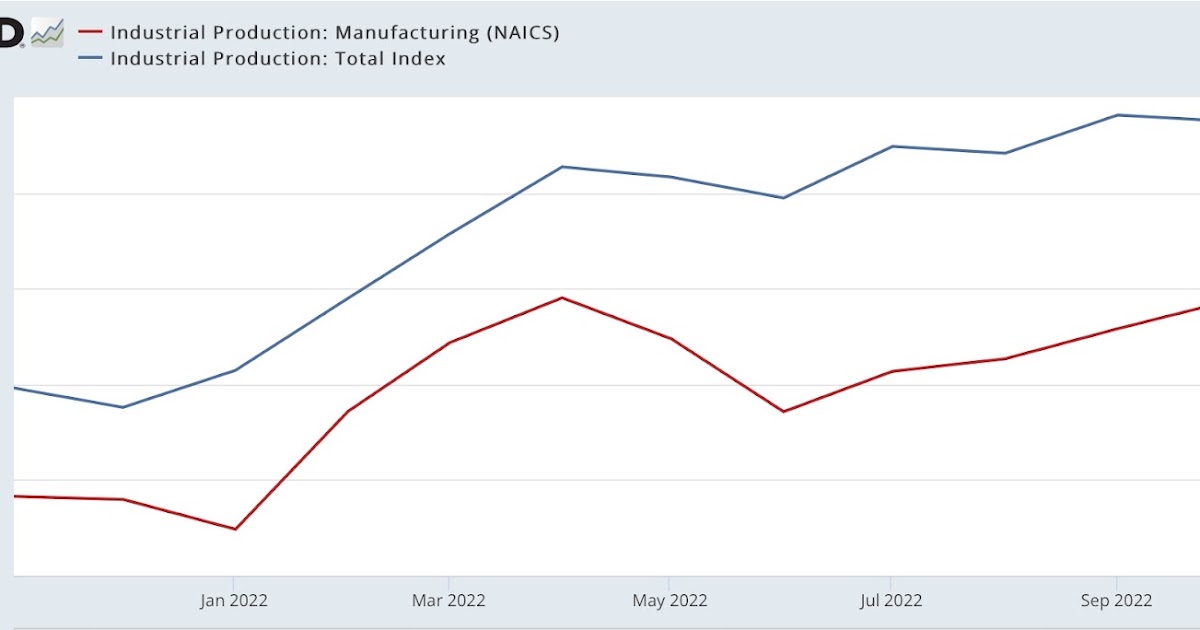 Yesterday I took a thorough look at the work. Today, let’s look at two other important matching indicators that the NBER looks at for guidance on whether the economy is expanding or in recession: manufacturing and sales.

As I’ve mentioned several times over the past month, according to the latest readings, it appears that industrial production (blue) and its manufacturing component (red) are either on the verge of a decline, or may have already peaked:

I noted yesterday that several leading indicators of this, the ISM manufacturing index and its new orders component, and also the manufacturing workweek, have already declined to recessionary levels. It would be unusual if proceedings did not follow.

In terms of sales, the picture is more complicated.

The NBER indicated that it looks to actual manufacturing and commercial sales for guidance. Here’s how it looks for the past year:

The “real” part means that the nominal data is deflated, but unfortunately I couldn’t find any information about the method used for the deflator. Also note that it is reported with a 2 month+ delay; the latest data is for October.

However, year-on-year to October, real sales were up just 1%. In the past, this weak year-over-year comparison almost always occurred shortly before or shortly after the start of a recession (but see 2002 and 2016):

We also have real retail sales through November, which were flat to a year-over-year decline:

That leaves component manufacturers and wholesalers to the actual sales. Here’s what they look like, along with retail sales, nominally for the 20+ years until the pandemic (in logarithmic terms; production at the right scale):

Note that both manufacturers and wholesalers saw sales decline even in nominal terms prior to the onset of the 2001 recession and the pandemic. In all cases, wholesaler sales fell in tandem with or slightly behind manufacturer sales. Retail sales were their own animal and were much less volatile.

Next, here are nominal manufacturer sales since the start of the pandemic, normalized to 100 as of December 2021, compared to wages (red) and raw materials (gold):

Now let’s turn to wholesalers, showing their nominal sales, also normalized to 100 as of December 2021, compared to producer wages and prices for final demand:

In general, it has always been the case that inventory is turned over only after sales. As of yesterday, as noted above, even nominal sales have declined while inventories have increased. This is the marker for the beginning of the recession.

In summary, two of the three components of sales – retail and wholesale – appear to have declined. The last component – production – shows many weaknesses when it comes to production. The question will be whether manufacturing inputs have continued to fall in price or whether this has also reversed. If so, real manufacturing and trade sales may have already peaked, although we won’t know until the data is reported in late February or March.