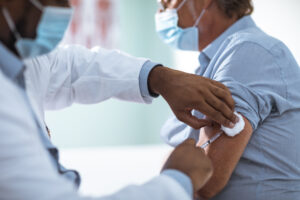 About three years after the Covid-19 pandemic, 25 governors wrote a a letter Monday, who called on President Joe Biden to end the public health emergency.

The public health emergency expires on January 11. But the Biden administration said it would give 60 days notice before deciding to end the emergency. Since no warning was issued in November, it is likely to be extended until April.

The letter asks Biden to allow the public health emergency to expire in April and provide states with advance notice of the decision so they can prepare. Governors who signed the letter include Chris Sununu of New Hampshire, Ron DeSantis of Florida and Greg Abbott of Texas.

“Although the virus will be with us for some time, the emergency phase of the pandemic is behind us,” the governors said. “We’ve come so far since the start of the pandemic – we now have the tools and information we need to protect our communities from Covid-19.”

In 2020, the Families First Coronavirus Response Act was passed due to the pandemic. It barred states from excluding people from Medicaid during the public health emergency and gave states a temporary increase in federal Medicaid matching rates. States have added 20 million people to Medicaid since the pandemic began, according to the letter. That’s hurting states, governors say.

“The [public health emergency] adversely affects states, primarily by artificially increasing our Medicaid covered population (both traditional and expanded populations), regardless of whether people remain eligible for the program,” the letter states. “While the enhanced federal match provides some assistance in reducing rising costs due to higher enrollment in our Medicaid programs, states are required to increase our non-federal match to adequately cover all enrollees and cannot exclude members from the program. unless they do so voluntarily.”

The governors added that a “significant number” of people have returned to employer-sponsored coverage or are getting insurance through the individual market.

“Yet states must still account for and pay for their Medicaid enrollment in our non-federal share. It’s costing states hundreds of millions of dollars,” the governors said.

About 18 million people may lose Medicaid coverage after the public health emergency expires, including 3.8 million who will become completely uninsured, a recent Urban Institute report projected.

The American Hospital Association pushed for the latest extension of the public health emergency, saying in July a letter that hospitals will be greatly affected.